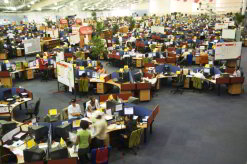 Consistent ratings of South Africa as an investment market as well as a strong ranking against emerging markets – and specifically the BRIC nations of Brazil, Russia, India and China – underpin the country’s performance in the annual Ease of Doing Business Index results announced by the World Bank in Washington on 4 November 2010.

The Ease of Doing Business Index is an index created by the international financial institution, and uses empirical research to justify its work by showing the effect of improving regulations on economic growth.

The index is meant to measure regulations directly affecting businesses and does not directly measure more general conditions such as a nation’s proximity to large markets, quality of infrastructure, inflation, or crime.

South Africa lost two places in the latest index results and is now placed 34 out of 183 economies.

“Our consistent ratings are underpinned by improvements in areas such as closing a business, where we are up three places to 74; as well as in enforcing contracts where we improved on position to 85, from 86. In contrast to this South Africa lost ground in areas such as starting a business, registering a company and trading across borders,” he said.

Matola added that Brand South Africa will continue to prioritise efforts to promote the country’s reputation as a globally competitive investment destination, guided by indices such as the World Bank’s Doing Business Index and others.

“It is critical that we align all the recent indices with our own strategic priorities and measure the direct impact of our efforts in these regions on a market by market basis,” he said.

“South Africa’s role as an emerging market which can compete comparatively with some of the BRIC nations and act as a credible connector to the 1-billion consumers on the continent has been boosted by the recent results where all four BRIC nations lost ground and where sub-Saharan Africa made the greatest improvements,” said Matola.

“The credibility of South Africa being ranked as one of the top emerging economies in terms of its ease of doing business has a significant impact on its competitiveness as a country with which investors would want to do business in the future. Studies and reports such as these are key to our understanding and efforts to position and profile South Africa as a trade, investment and tourism destination of choice.”