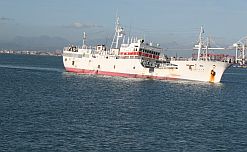 A new direct shipment service between New York and Durban is tipped to help increase trade between the US and Southern African countries.

DHL’s new express line enables US and Southern African traders to ship their cargo directly to ports in the two cities, rather than going via Europe.

The service is based on Less than Container Load (LCL), which is perfect for transporting small quantities of cargo not large enough to fill an entire container. It’ll be particularly useful for medium-sized businesses that trade globally.

As a “guaranteed” weekly service, ships sail from New York every Thursday, heading to South Africa. DHL said it started operating the route on 23 June 2011.

The leading logistics company said the LCL will help cut transfer times, freight costs and its carbon footprint, “ultimately benefiting US customers interested in growing their business in the African market”.

“US customers will have the opportunity to connect more easily with trading partners in Africa, while at the same time increasing their business efficiency and competitiveness,” Joseph Oguta, director of Ocean Freight and head of LCL Management Africa, said in a media statement.

Trade between Africa and the US has made an impressive rebound, after being slowed down by the global recession in 2008.

Total trade between the US and sub-Saharan African countries grew by 32% from 2009 to 2010, as both exports and imports increased, according to International Trade Administration.

“Trade between the US and Africa is on the rise,” said Amadou Diallo, DHL’s CEO for Africa and South Asia Pacific. “DHL Global Forwarding definitely sees potential in the US-Africa trade lane.”

Marc Meier, DHL vice president, added: “… As America aims at doubling its exports over the next few years, this new service helps it trade with Africa more easily and efficiently.”

The US may be looking to reclaim its former position as Africa’s largest trade partner, which it lost to China in 2008.

The Port of Durban, the busiest container port in Africa, is well-positioned for increased trade between the continent and the US. It handled over 74-million tons of cargo, which included maize, metals, minerals, oil and other petroleum products during the 2008/09 financial year.

“Durban is the largest container terminal in the southern hemisphere and is the ideal gateway for US customers interested in breaking into the African market with the option of transporting small amounts of cargo,” Oguta said.

DHL said the new service will increase cargo haulage to US target areas such as Durban, Cape Town, Port Elizabeth, Johannesburg and Pretoria in South Africa, Gaborone in Botswana, as well Mozambique’s Maputo, Beira and Nacala.

It will also improve the movement of goods to Harare in Zimbabwe, Lusaka in Zambia, Port Louis in Mauritius, Maseru in Lesotho, Manzini in Swaziland, Luderitz and Walvis Bay in Namibia, Luanda and Cabinda in Angola and the Democratic Republic of Congo’s Matadi.