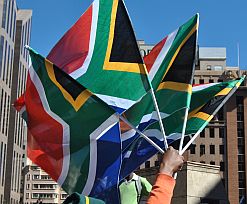 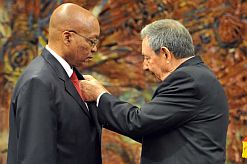 South Africa has cancelled Cuba’s R1.1-billion debt owed to it, a decision that the government said will help accelerate trade between the two countries.

Cuba racked up the debt in the 1990s when it bought a series of diesel engines from South Africa.

An agreement cancelling the sum was signed on 7 December 2010 during a state visit to the Caribbean nation by President Jacob Zuma and a delegation of ministers.The Department of Trade and Industry (DTI) said trade between the countries had plummeted over the years because of the debt. South African businesses could no longer deal with Cuba on a credit basis as the country had reached its credit limit.

“South African businesses demanded cash in advance because the Export Credit Insurance Corporation could no longer insure Cuba’s orders as it had exhausted its credit limit,” said DTI minister Rob Davies in a statement. “We are re-opening the credit lines so that we can start trading actively again.

“It is not as if Cuba could not repay the debt. The problem is that [the debt] was becoming a hindrance to trade and economic development between the two countries,” Davies added.

Trade between South Africa and Cuba has dropped drastically since 2008. In that year South African exports to Cuba earned the country R82-million, but by 2010 the amount had dropped to about R1-million, according to the South African government.

“It is envisaged that this package will help boost trade and investments between the two countries which had stagnated,” said Zuma’s spokesperson Zizi Kodwa.

South Africa also extended credit guarantees to Cuba worth R70-million, which according to Zuma will “insure South African suppliers for exports to Cuba”.

In total, South Africa finalised a R210-million credit line package for Cuba. This amount includes the credit guarantee and a R40-million fund to boost Cuba’s agricultural sector, which has been struggling since a hurricane hit the island in 2008.

“We are convinced that these support mechanisms will kick-start a new, more dynamic mutually beneficial trading relationship between our two fraternal countries,” Zuma said in his speech at a business forum.

Business moguls from both countries attended the forum. Zuma invited Cuban businesses to invest in South African industries such as aerospace, chemicals, agro-processing and ICT, among others.

South Africa’s new infrastructure development programme could produce ample investment opportunities for Cuban businesses, Zuma said. He said the government will spend more than R694-billion on the programme over the next three years.

“Cuban companies and skilled personnel can explore opportunities in this programme,” Zuma said.

Cuba, a socialist nation currently undergoing economic reform, has been a long-time political ally of Africa. Its army was instrumental in mounting struggles against colonialism on the continent.

Diplomatic relations between South Africa and Cuba began in 1994 when the former became a fully democratic nation.

Today, Cuba plays a significant role in South Africa and the rest of Africa’s health sector. Each year Cuba offers medical scholarship to 80 South African students. More than 500 South African youngsters from poor communities have benefited from the programme, which creates opportunities for them to study in Cuba.

A further 2 000 youngsters from various other African countries have also received such scholarships in recent years.

Many Cubans play an active role in the South African economy. There are more than 400 professionals including doctors, architects, engineers and technical experts “rendering services to South African communities”, said Zuma.

“Cuban doctors have for many years provided service to people in need of essential medical care,” the president added.

* The South African Rand was R6.93 to the US Dollar at the time of publishing