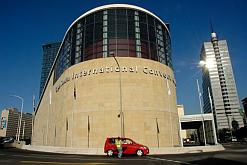 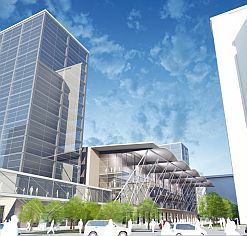 An artist’s impression of the CTICC
once the expansion project is complete.
(Image: Supplied by CTICC)

A multimillion-rand investment in refurbishments at the centre was revealed in the city on 30 March 2011. The exact amount secured for the expansion project is R605-million, according to CTICC spokesperson Zeenat Parker.

The development will form part of the R4.5-billion Cape Town CBD regeneration project.

The expansion of the convention centre will include 10 000m³ of new retail space, an office tower and a host of new basement parking bays.

Another major focus of the expansion will be creating a stretching precinct that connects the CTICC to the Artscape. Founder’s Garden precinct is to be regenerated to achieve this massive precinct.

A new private hospital will also be located within the precinct. Netcare has confirmed it will relocate its Christiaan Barnard Memorial Hospital to the new site under a lease agreement.

The creation of 8 000 jobs between 2011 and 2018 will be one of the project’s immediate economic spinoffs. More corporate-style jobs are expected to become available after construction is complete.

The CTICC’s contribution to the economy will grow as a result of the expansion. According to a report conducted by the University of Cape Town’s Graduate School of Business, the centre’s GDP contribution is expected to increase from the current R2.3-billion to more than R5.1-billion annually in the coming years.

The convention centre was built at a cost of R565-million by the City of Cape Town, the provincial government and private investor Sun West in 2003. The city pumped in R284-million and has a 50.18% majority share hold, so the CTICC remains a municipal property.

Management is regularly commended for running the centre well. It’s been a lucrative business since operation began, said the city’s mayoral committee member Felicity Purchase. “Cape Town ICC has far outperformed expectations, becoming a profit centre in its own right.

“Both operating and capital costs are being recovered, it has paid rates, never needed any further funding from council after the original investment and has even been in a position to pay a dividend although this has never happened,” said Purchase in a statement.

“The CTICC has over the years become the flagship events and conference venue in the city. I am certain that the expansion will bolster the city’s goal to be the destination of choice in Africa,” said City of Cape Town’s outgoing mayor Dan Plato.

The World Congress of Nephrology in 2015 and the Options on the Control of Influenza conference in 2013 are some of the important international meetings that the venue has secured.

“Cape Town has identified the holding of events as a key component of its economic development strategy. The expansion of the Cape Town International Convention Centre is at the core of this strategy,” said Purchase.

The expansion will boost business tourism more than anything else. “This project will allow Cape Town to bat in the business tourism major leagues by creating a far bigger and more compelling conventions and cultural events space that we can offer to the world,” said Western Cape’s MEC for Finance, Economic Development and Tourism, Alan Winde.

“This expansion will allow us to maximise on our competitive edge in this key strategic sector,” he added.

The CTICC has been pipped by the Durban ICC for Africa’s Leading Meetings and Conference Centre accolade at the World Travel Awards six times, but it did win the title once in 2007.

* At the time of publishing the rand was R6.79 to the US Dollar