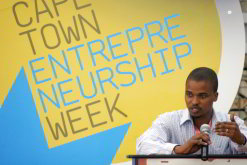 Participants at the upcoming Cape Town
Entrepreneurship Week will look at ways
of making the city a small business
hub in the future.
(Image: CTEW) 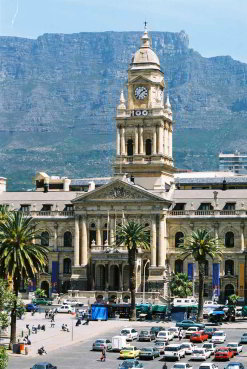 The magnificent City Hall is the venue for
this year’s Entrepreneurship Week events.
(Image: Cape-Town.info)

In a bid to develop a thriving entrepreneurial hub, Cape Town city management is encouraging citizens to improve their business knowledge with the hosting of Cape Town Entrepreneurship Week (CTEW) later this month.

The event, which is part of Global Entrepreneurship Week, will take place at the Cape Town City Hall between 15 and 21 November.

The week-long event comprises a three-day conference, an expo, an open day for the public and a number of community and satellite events. It looks to attract entrepreneurs who run small-to-medium enterprises (SMEs) that employ up to 100 people.

According to CTEW event coordinator Paul Vicars, the purpose of the event is to kick-start the creation of an entrepreneurial hub focused on SMEs, within Cape Town.

Vicars said that smaller satellite events have already taken place in the build-up to the CTEW. Mentors and entrepreneurial coaches have held presentations in the townships of Gugulethu and Mitchell’s Plain, as well as the community of Muizenberg.

Vicars described this programme as an initiative geared towards fostering an ecosystem of entrepreneurs in the city. It is based on Barcelona Activa, the business development agency of that city’s council.

Activa representatives will present their model at the CTEW and explain what they are trying to achieve and what they can do for entrepreneurs.

CTEW co-event organiser Gordon Metz said that the event will open with a discussion on emerging markets that have achieved high annual growth rates of up to 7%.

Experts from Colombia, Thailand, India and South Africa will then discuss ways in which Cape Town can adopt those strategies that enabled the emerging markets to achieve such high growth rates.

Metz said that these particular countries have achieved economic success because their small businesses have thrived.

On 19 November, the CTEW will hold a free open day and will encourage smaller businesses and informal traders to attend.

Young and successful entrepreneurs will hold presentations that focus on various essential aspects of entrepreneurship such as the personality traits a businessperson needs, how to draft a business plan, raising finance, and how to deal with legal aspects, tax and administration.

An entrepreneurial culture is needed

He said that GEM’s localised study, conducted at the University of Cape Town’s Business School, showed that an underdeveloped entrepreneurial culture contributed to South Africa’s lowly position on the world entrepreneurial stage.

Metz’s biggest concern is the absence of this culture in the public sector, which he said needs to be incorporated into the government’s work ethic to help it face modern challenges.

“The old bureaucratic ways of operating do not hold any longer,” he said, adding that entrepreneurship is a way of life and should be instilled in all sectors, from government and business to education.

Education and entrepreneurship are linked

According to Metz, another major challenge for entrepreneurial growth is the lack of skills. He added that the education system does not teach students to think of entrepreneurship as a career.

“There is a strong relationship between education and entrepreneurship. It is not only about finances and money but about education, skills, exposure and creativity,” he said.

Metz emphasised the need for a system that will instil confidence in one’s ability and creativity. He said confidence and self-awareness are two of the traits needed to be successful.

Other challenges Metz spoke of were the lack of financial support for start-ups and for smaller businesses who are struggling to sustain themselves.

He said that a large proportion of businesspeople fall into the informal sector and remain there because they do not receive support.

He added that there is willingness to back small businesses, but the sector is so fragmented that entrepreneurs don’t know where to go when looking for assistance.

According to Metz, one of the discussions during the week will focus on the role of a city in economic growth. He said that South Africa and the rest of Africa are experiencing significant growth in urbanisation due to the high influx of rural citizens into cities.

Moreover, the increasing number of young people living in cities makes these areas important hubs of the economy.

“About 15 years ago, only 30% of the country’s population lived in cities. This year, more than 50% of people live in cities,” said Metz.

He said that within 15 years, five or six cities will be responsible for South Africa’s economic growth. Cities, he added, should be poised to take advantage of this phenomenon.

“It is the cities and not nation-states that will provide economic growth,” he said.

Start new businesses instead of job-hunting

CTEW co-director Martin Feinstein believes that the creation of new businesses and not jobs is the answer to developing a sturdier economy.

He said instead of trying to create 5-million jobs, as the government pledged to do in the next year, it would be more effective to start-up 1-million businesses that can, in turn, create those 5-million jobs and grow to employ even more people.

“In a city like Cape Town, it is not unreasonable to target an additional 10 000 new businesses,” said Feinstein.

Considering that 50 000 jobs were reported to have been lost in October alone, Feinstein said the current trend is not of job creation but of job losses.

He said that for job creation and economic growth to occur, new and sustainable businesses need to start up and grow rapidly.