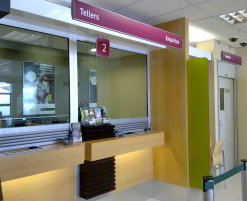 In terms of the soundness of its
banking system, South Africa ranks
second in the world.
(Image: Janine Erasmus)

South Africa improved its ranking in the World Economic Forum’s (WEF’s) latest Global Competitiveness Index, climbing four places to 50th out of 142 countries surveyed, while claiming top spot for regulation of exchanges and second place for soundness of banks.

Published on 7 September 2011, the annual Global Competitiveness Report was first released in 1979 and has since evolved into the prime authority on relative competitiveness among most of the world’s nations.

Respondent numbers have grown over the years, with the 2011-12 report covering 142 countries and some 14 000 respondents.

South Africa’s overall ranking, after slipping nine places last year – from 45 to 54 – recovered to 50 in 2011-12, thanks mainly to impressive gains in accountability of private institutions, strength of investor protection and technological readiness.

The country was ranked:

“Since these factors are categorised by the World Economic Forum as sustainability issues, their superior ratings are indicative of a highly positive long-term outlook for the South African economy,” Miller Matola, CEO of Brand South Africa, said in a statement.

“These combined attributes make South Africa the most competitive economy in the region.”

2nd in Africa; 2nd among BRICS

South Africa’s 50th overall ranking is sub-Saharan Africa’s highest, and Africa’s second-highest after Tunisia, which dropped from 34th place in 2010-11 to 40th place in 2011-12 owing to the political upheaval in the country.

Among its fellow BRICS nations, South Africa is ranked second only to China (in 26th place), ahead of Brazil (53rd), India (56th) and Russia (66th).

Matola said the narrative of the WEF report clearly indicated trust in South Africa, at a time when trust was returning only slowly in many parts of the world.

“We could have fared considerably better had we not lost further ground in the categories in which we scored poorly last year – labour policies, health and education.

“We need to improve our rankings in these criteria if we are to continuously move up the rankings.”

Matola said the results were “an indication that the reality and perception of competitiveness in South Africa is improving at a pace ahead of that of many other countries.

“The World Economic Forum derives about 60% of its score values from actual market data and 40% from perception. That South Africa has scored well on both counts is both highly gratifying and encouraging.

“Of importance, too, is our third ranking for protection of minority shareholders’ interests,” Matola added. “South Africa’s strong performance in the financial market and corporate governance dimensions is an indication that the country is deemed a safe destination for business and investment.

“This is a positioning the country will have to work hard to maintain amidst florid debates about open market policies.”

“Given a clear account based on international standards, backed by strong regulation and robust corporate governance allows investors open and easy access to assessing the risks and rewards associated with corporate South Africa,” Müller said in a statement.