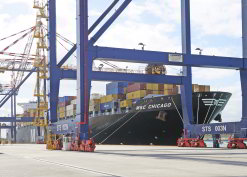 Ngqura was originally intended as a
deep-water bulk port to handle
manganese and other ore
exports, but the focus has
shifted to container-handling.
(Image: Rob Duker) 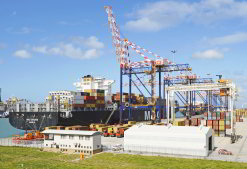 South Africa’s Port of Ngqura in Port Elizabeth in the Eastern Cape is booming, with a more than 400% increase in vessel arrivals since it opened in October 2009.

Originally intended as a deep-water bulk port to handle manganese and other ore exports, the focus at Ngqura has shifted to container-handling. A container terminal has now been added for that purpose.

The mandate of the original Port Elizabeth harbour still revolves around manganese and other bulk ore.

Transnet Port Terminals (TPT) chief executive Tao Morwe shared the organisation’s vision with the Port Elizabeth business community at a business networking session earlier in September 2011. He said the country has the opportunity to develop a strong maritime industry.

“We want to create a port authority which is recognised for the primary role it can play in bringing about positive economic development,” Morwe said. TPT handles all terminal operations at South African ports.

“The container terminal has a capacity of 65 to 80 tons and is looking at doing 25 to 30 container moves per hour,” said Captain Neil Chetty, acting port manager and harbour master.

“The future of this port lies in it becoming a transhipment hub,” he added. However, manganese ore exports may still be transferred from the Port Elizabeth harbour to Ngqura in the future.

Dredging of the basin has been completed, enabling two 300m ships to berth at the same time.

Nearby rail and road transport infrastructure has also been completed, including links to the port, to the 12 000ha Coega Industrial Development Zone (IDZ), to the existing Port Elizabeth-Gauteng main railway line, as well as to the existing N2 highway.

Future developments include the possibility of moving the bulk liquid terminal from the Port Elizabeth harbour to Ngqura and talks are under way with the preferred bidder.

The bulk liquid terminal in Port Elizabeth will be closed in 2014.

Chetty said that the intention is to develop the port further up the Coega River Valley and southwest along the coast. On completion, the port will have a total of 32 berths.

Also on the cards is the Kalagadi Manganese Smelter earmarked for zone six at the Coega IDZ and the environmental impact assessment has begun. The smelter will have a capacity of 320 000 tons of high carbon ferromanganese per year.

“The Port Elizabeth port is strategically well positioned to the deep water Port of Ngqura and will play its part as a gentle cargo port,” said port manager Rajesh Dana.

It will continue to deal in moving cargo such as motor cars and related automobile components as well as fresh produce. The port continues to be regarded as the “Detroit of Africa” with its 5 000 parking bay capacity and 159 units per hour being handled. Through its bulk terminal, the harbour moved 4.2-million tons of manganese ore in 2010.

Although the Port Elizabeth harbour is South Africa’s fifth largest port in terms of tonnage handled, it has seen a reduction in container movement since the establishment of Ngqura. This was exacerbated by the international economic crisis.

But Dana feels the port will play a complementary role to Ngqura in the future.

With a growing fishing industry in the area, the Port Elizabeth port will revitalise the 40 ton slipway and improve general road and rail infrastructure.

Dana said tourism will also play a more important role in the port’s future identity, with the possibility of increased cruise-ship berthing and the development of the Port Elizabeth waterfront.