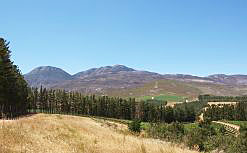 South Africa’s veteran winemaker Paul
Cluver received a Lifetime Achievement
award for his contribution not only to
wine, but to humanity.
(Image: Paul Cluver estate)

Cluver, whose Paul Cluver estate was also nominated for a Green award in the category of Ethical Vineyard, was honoured at a ceremony in on 11 February.

The pioneering vintner was unable to receive his prize in person as he was still recovering from burns sustained in the January inferno that ravaged the ’s Overberg region, a picturesque part of the province.

The Overberg is renowned for its ideal fruit- and wine-growing climate and, along the coastline, its prime whale-watching spots. However, the fire, suspected to have been arson, raged for many days, claimed one life, and destroyed over 60 000 square kilometres of land, much of it ecologically important and covered with fynbos.

Cluver, whose 3 500ha farm De Rust was threatened by the blaze, fought the fire on New Year’s Eve 2009 with his son-in-law, and was seriously burnt on his arms and chest.

“This award is well deserved – I’m absolutely delighted,” said Cluver’s son Paul Cluver IV. “My father is an inspiration to our family and the cornerstone of Paul Cluver Wines. This is a just reward for what he has, and continues to unselfishly do for others.”

Cluver received his award for “his energy and holistic approach to environmental issues”, according to Tesco’s wine, beer and spirits manager Dan Jago, who presented the award.

While he was deeply honoured, he didn’t feel as though his efforts had been hard work at all, but rather a privilege, Cluver himself commented.

Cluver was pitted against distinguished French winemaker Bernard Cazes of Domaine Cazes, and Chilean José Guilisasti of Viñedos Emiliana, viewed as one of ’s top viticulturists. But the South African easily saw off the stiff competition.

did well on the night. Paarl-based vineyard Backsberg Estate Cellars was presented with the Sustainability award.

Backsberg was up against two of its compatriots, Graham Beck Wines and the Spier Wine Estate, as well as New Zealand Winegrowers, O-I Australia, the California-based Fetzer Vineyard, Amorim & Irmãos in , and Bodegas Torres of Spain.

The winery was also the only South African operation to receive a nod in the Green Company of the Year category, but didn’t manage to walk off with the prize.

Another South African triumph came when Inge Kotzé, project coordinator of the Biodiversity and Wine Initiative took the Green Personality of the Year award.

Kotze competed against Master of Wine Susan McCraith of Ethical Fine Wines, Adolfo Hurtado Cerda of the Cono Sur Vineyards and Winery, and Alois Lageder of the Alois Lageder Winery.

She was honoured for “her passion, influence and determination in getting her message across in ”. The Biodiversity and Wine Initiative aims to bring the South Africa wine and conservation sectors together to prevent further loss of biodiversity, while continuing to produce some of the best wines in the world on a sustainable basis.

Dr Paul Cluver III is a true pioneer of the South African wine industry. Although he started out growing fruit, he was the first person to seize the wine-growing opportunities of the mountain plateau in the Overberg, and planted the first vines in that area in 1986.

The 68-year-old Cluver is a top neurosurgeon by profession, with four medical degrees to his name, but has since retired. He heads the wine-making team that represents three generations of Cluvers.

The Cluver farm De Rust, originally purchased by Cluver’s great grandfather, has since become not only a source of some of the country’s finest wines, but also an important conservation region.

Just over 1 000ha of the estate, which sits within the Kogelberg Biosphere Reserve, the first biosphere reserve to be proclaimed in , is protected and known as the Cluver family reserve. It is managed according to a programme drawn up by the CapeNature Stewardship Programme.

Cluver is something of a tortoise conservation pioneer too, and channels some of the proceeds from his involvement in the sales of Slowine wine products to protect the geometric tortoise, one of the most endangered tortoise species in the world.

The Slowine emblem is also a tortoise, in honour of the rare reptile and to remind wine lovers to take life at an easy pace.

Cluver is responsible for other innovative concepts such as a composting system developed with the help of the Council for Scientific and Industrial Research, ’s Eco-route which encourages tourism and business in the region, and extensive conservation research and work.

He is well known as a philanthropist who works tirelessly to uplift the communities around him with initiatives such as the De Rust Futura school. This was established by his mother back in the 1940s, when racial segregation was on the rise, and it now accommodates some 800 pupils.

He also drove the foundation of the project in 1995. This involved Cluver, the state-owned South African Forestry Company and the forestry community of Lebanon near Grabouw, which was left struggling after the government suspended its operations in that area some years before.

Cluver donated 100ha of his own land and persuaded the government to match his gesture, to enable the community to forge a new income for themselves. Although the black empowerment project encountered a number of logistical and internal problems, the end result of this initiative was the establishment of the Thandi wine label, which is said to be the world’s first Fairtrade wine brand.