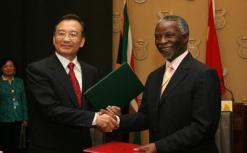 China has become Africa’s third-largest trade partner, after the US and former colonial power France. According to a report by China’s General Administration of Customs, bilateral trade between China and Africa will exceed R803-billion ($100-billion) in 2008, two years earlier than predicted.

China had expected trade to hit that mark by 2010. The country also plans to increase oil and gas imports from Africa by up to 40% in the next five to 10 years.

The trend is attributed to escalating shipments of natural resources to China, especially crude oil, mainly from Sudan, Chad, Nigeria, the Republic of Congo and Angola, metals from Ghana, Gabon, the Democratic Republic of Congo, Zambia, and South Africa, as well as cobalt and other minerals. At the same time, goods manufactured in China are increasingly sought after by African consumers.

During the first half of 2008, exports to China from Africa rose 92% to R240-billion ($30-billion), while the continent imported goods to the value of R184-billion ($23-billion), an increase of 40% according to the Chinese customs authority. The growth in trade was attributed to an upswing in the economic climate in Africa, as well as demand from China for natural resources to drive its own fast-growing economy.

A report released in July 2008 by the World Bank states that China, together with India and several Gulf nations, is financing a number of large infrastructure projects, such as hydropower schemes and transport schemes, across sub-Saharan Africa in a drive to reduce poverty. The World Bank says that investment by these nations reached R64-billion ($8-billion) in 2006 and R40-billion ($5-billion) in 2007.

Nearly 70% of Chinese investments are concentrated in Angola, Nigeria, Ethiopia, and Sudan, says the report, and 33 countries in total have received finance from China for infrastructure. Moreover, China attaches very few demands and conditions to its investments, laying the groundwork for unencumbered development, said British researcher Bill Durodie, an associate fellow with the Royal Institute of International Affairs.

The growing South-South co-operation was the result of China’s consistent demand for natural resources and Africa’s ample oil and mineral reserves, much of which is still under-exploited, said the World Bank’s Vivien Foster, the organisation’s lead economist in sustainable development for the Africa region.

The report states that oil makes up the bulk of African exports to China, comprising some 80% of total exports. While 57% of Africa’s oil goes to the US and Europe, China imports 14% of the resource.

Africa’s need for infrastructure development was balanced by China’s well-oiled construction industry. Development experts say that aged and under-developed infrastructure is cutting the growth of African economies by up to 1% every year.

China and Africa collaborate extensively together on economic, cultural, educational and agricultural programmes. The Sino-Africa Co-operation Forum was established in 2000 between China and willing African countries to facilitate constructive dialogue and South-South cooperation.

Since the establishment of the forum, economic and trade cooperation between China and Africa has boomed. This was helped by the fact that China has written off 10.9-billion yuan (R11-billion or $1.4-billion) owed to it by 31 heavily-indebted poor African countries. China also implemented a zero-duty regime for some imports from Africa.

South Africa’s relations with China have improved dramatically since the two countries resumed diplomatic ties on New Year’s Day in 1998. Writing in January 2008 to mark the 10th anniversary, former Chinese ambassador to South Africa Liu Guijin said that South Africa, as the biggest economy in Africa, sees huge potential for economic and trade cooperation with China.

In 2000, said Liu, trade between the two countries amounted to R16-billion ($2-billion), more than 20% of the total trade volume between China and the entire African continent. And by the end of 2006, Sino-South Africa trade had increased nearly five times to R78-billion ($9.8-billion).

However, said Liu, the years of isolation had taken their toll and there is a need for greater mutual understanding between the two nations. This is being addressed not only through bodies such as the Sino-Africa Co-operation Forum, but also through increased tourism and exchange on a personal level. More Chinese nationals have been travelling to South Africa, said Liu.

Under the Sino-Africa Co-operation Forum, Chinese professionals are sharing their expertise with Africans to improve the lives of others – for example, academics from China Fujian Agricultural and Forestry University have been applying their mushroom-planting technology to help South African farmers boost their incomes.

In the first quarter of 2008, China became South Africa’s largest import market, snatching this position from Germany. The country is the fifth largest export destination for South African goods. Trade between China and South Africa has been increasing at around 20 to 30% annually over the last 12 years.

China has set up more than 80 companies in South Africa since 1998, according to the Department of Foreign Affairs, while South African investment in China is valued at approximately R5.6-billion ($700-million). South African companies with stakes in Chinese industry include SABMiller; MIH (part of media group Naspers); petrol manufacturer Sasol, and mining companies Anglo American, Kumba Iron Ore, Anglo Gold Ashanti and Gold Fields, among others.