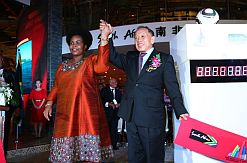 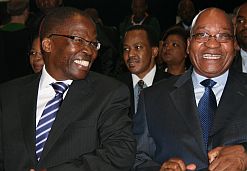 The South African government is seeking to bolster relations with China, the country’s largest trade partner.

President Jacob Zuma will lead a delegation of government ministers, including Tina Joemat-Pettersson of agriculture and S’bu Ndebele of transport, and leading local business people to the Asian country on a state visit from 24 to 26 August 2010.

The visit will involve “strengthening and broadening economic and commercial interaction between the two countries”, the Department of International Relations and Cooperation said in a statement.

The main thrust of the trip is about expanding South-South trade relations between Africa and fast-growing economic superpowers like China, India and Brazil. A new Comprehensive Strategic Partnership between South Africa and China will be signed with a view “of deepening and broadening the current bilateral relations”, the department said.

A number of memorandums of understanding (MoUs) will be signed between the two governments to strengthen cooperation in geology and mineral resources, environmental management, transport and railways.

Business and investment contracts between South African and Chinese private companies will also be signed, according to the Department of International Relations and Cooperation. These agreements will be followed by a business seminar in Beijing involving more than 200 South African business leaders and entrepreneurs.

Trade between South Africa and its Asian counterpart has grown by more than R100-billion (US$13.6-billion) since 1998, when full diplomatic relations were established.

China was named South Africa’s largest export destination at the beginning of 2009, surpassing the US. On the import side, it’s is also South Africa’s largest partner, “as economic and trade relations between the two countries have intensified”, according to the Department of International Relations and Cooperation.

“Trade statistics with China continue to reflect the potential that exists for expanding the commercial relationship,” the department added.

The government says bilateral ties between the two countries are “sound and cordial”, adding that they have been strengthened over the years through visits by ministers, premiers, business leaders and civil society from both nations.

Minister of International Relations and Cooperation Maite Nkoana-Mashabane, who will accompany Zuma on this trip, also went on an official visit to China earlier 2010.

Relations between the two are currently supported by more than 60 joint agreements such as MoUs and declarations.

South Africa’s image in China has been recently enhanced through the Shanghai World Expo. The country’s exhibition area has attracted more than 100-million visitors, according to the government, since the expo opened on 1 May. Taking place in Shanghai, China’s economic hub, the expo will run until 31 October.

Exposure through the 2010 Fifa World Cup and the 10-year anniversary celebrations of SA-China relations in 2008 in China have also helped boost ties between the two nations.