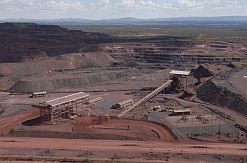 Mining is one of the economic sectors
which is set to flourish in the SADC region
as a result of the trade fair and
investment forum to be held in May.
(Image: MediaClubSouthAfrica.com. For
more free photos, visit the image library)

The Southern African Development Community (SADC) is expecting its biggest ever investment of Chinese money in the region when representatives from China’s major industries travel to South Africa in May 2011 for a trade forum.

The IMEXPO SADC-China Trade Fair and Investment Forum will be held at the MTN Expo Centre, in the south of Johannesburg, from 18 to 20 May.

The forum will see many Chinese industrialists and investors coming to the country to liaise with their Southern African counterparts and evaluate trade and investment opportunities in the region.

The event follows South Africa’s inclusion and formal induction into the BRIC group of rapidly developing nations on 13 April 2011. The increasingly influential bloc includes Brazil, Russia, India and China. After the addition of South Africa, the group became known as BRICS.

The expo is the brainchild of Expo International, an events company from Cape Town and its Chinese partner, COIFAIR.

Although the trade and investment fair will cement China’s role as South Africa’s biggest single trading partner – after it overtook both the UK and the US – the benefits of it will be felt way beyond the country’s borders.

Matthews Malefane, a lobbyist and facilitator for the organisers of IMEXPO, said: “The trade fair and investment forum is highly significant as it follows hot on the heels of South Africa having become a formal member of BRIC.

“It will without doubt bring demonstrable, tangible benefits to South Africa and the region. These companies and financiers across the major sectors will be actively looking to invest in those sectors in joint venture partnerships with locals and it could result in one of the biggest injections ever of Chinese money into the region.”

The forum will give the 15 SADC member countries a chance to present the investment opportunities within their respective countries to their Chinese counterparts.

Malefane said: “The expo is an opportunity for all SADC countries to assemble a portfolio of their high economic impact, job-creating, investment and development projects and bring them to the table for negotiations with potential Chinese joint venture partners and get access to Chinese capital.”

Some of the biggest Chinese enterprises attending the forum are the China Coal Group; the Sinopacific Ship-building Group; CRBC International, a major road and bridge-construction company; China Gezhouba, a hydro-electric company; the China International Water and Electric Corp and the China Railway Construction Corporation.

There will also be 21 Chinese mining firms at the forum.

Development in the region

The SADC was preceded by the Southern African Development Coordination Conference (SADCC), which was formed on 1 April 1980 in Lusaka, Zambia.

After the signing of the SADC Treaty and Declaration by the heads of government of Southern African countries on 17 August 1992, in Windhoek, Namibia, the SADC became an official body.