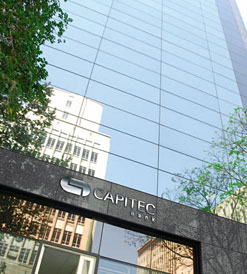 Capitec Bank is one of 27 brands from
around the world which, according to
Credit Suisse, are the brands of the future.
(Image: Capitec)

South Africa’s Capitec Bank is the only African brand to crack the list of “Great Brands of Tomorrow”, issued by the renowned Swiss-based financial services group Credit Suisse.

The Stellenbisch-based bank, which celebrates its ninth anniversary in March 2010, eclipsed its more  established – and far bigger – rivals to score a mention as one of the Zurich-based Swiss bank’s up-and-coming brands of the future.

Capitec was in illustrious company – there were 26 other brands nominated, among them Facebook, Apple, Polo, Swatch, Hyundai, Mahindra, and Amazon.com.

“Using our framework and global network of analysts,” said the report, “we identified 27 Great Brands of Tomorrow at various stages of development that we believe will significantly outperform the market over the next three to five years as they build and leverage brand equity to grow in size, scale, and profitability.”

Credit Suisse also said that it believes the future for brands, especially from an investment point of view, is very bright, because top brands reach millions of people around the world.

Over the coming years, said the institution, there will be thousands of new consumers in developing countries who will use their new-found spending power to support their favourite brands.

A group of 3 000 analysts in 50 countries participated in the survey, which aimed to distinguish those brands that were likely to outperform the competition in the future and rise to the top in their respective markets.

Credit Suisse rated its top brands on three main factors: innovation, aspiration, and scale. The first factor is self-explanatory. The second focuses on the tactics the brand uses to grow its influence with customers, and the third factor refers to use of the brand’s own power to develop advantageous relationships, cutting costs and maintaining its competitive edge.

“In our view, Capitec Bank is one of the exciting ‘new’ brands in South Africa,” said securities analyst Walter Jacobs of Credit Suisse. “Through the bank’s recent branding exercises like the new logo and TV advertising campaign, we also expect that its brand awareness will yield positive results for the bank and ultimately its shareholders.”

The Swiss company commended Capitec on its low-cost banking model, which attracts customers for whom value for money is an important issue and who are looking for a better alternative to the established options.

Capitec marketing and corporate affairs executive Carl Fischer said the bank was pleased to be the only South African company on such a prestigious list, and that it was honoured.

“At Capitec Bank we have based our business model on innovation and doing things differently,” said Fischer. “We have applied a pioneering approach to traditional banking by using technology, which have enabled us to simplify banking, so this international recognition is a powerful endorsement of the success of our strategy so far.”

He added that the success and wide acceptance of Capitec’s money management solutions, which involve a minimum of red tape, was seen in the bank’s rapidly growing client base.

Capitec’s plans for the 2010 fiscal year include the opening of 40 new branches across South Africa, bringing the total number to just over 400. Part of the strategy is to secure space in high-visibility shopping centres for at least 10 of these new branches, which is possible now because of the current economic climate and the resultant availability of space.

The bank currently services around 2.1-million customers, but the next benchmark is 2.5-million by the end of the 2010 fiscal year, and looking further ahead, 5-million by 2016/2017.

Credit Suisse maintains that most of Capitec’s growth remains in the unbanked or underbanked market and that there is still huge potential among the 37% of all South Africans who do not have banking facilities.

Capitec began operations in March 2001 and listed on the JSE less than a year later, in February 2002. It has 371 branches countrywide, with approximately 3 400 employees.

Capitec has introduced innovations, such as a 30-day loan that can be arranged entirely via a mobile phone, that simplify the often complicated banking business. The customer sends a text message with the loan amount needed, the loan is processed, and once it is approved the funds are available immediately in the customer’s account – with no filling out of interminable forms required.

Strategies used to grow the brand include a stint on popular soapie Generations, which increased visibility and awareness. 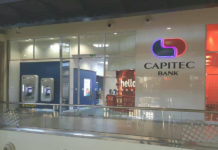 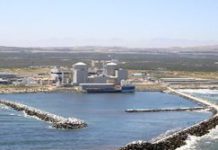 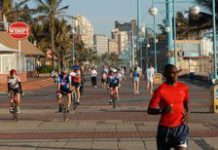