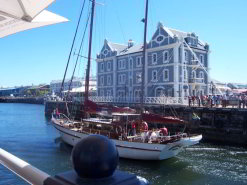 The V&A Waterfront is one of the places
to visit in Cape Town, and is currently
receiving a R500-million makeover.
(Image: MediaClubSouthAfrica.com. For
more free photos, visit the image library) 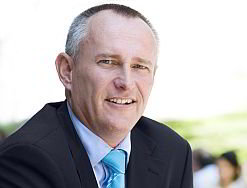 The V&A was bought by Growthpoint in March 2011 from Dubai World and London & Regional Properties for R9.7-billion ($1.4-billion), making it South Africa’s biggest single property deal to date.

The deal to return the V&A to South African owners took almost two years to complete because it was subject to conditions such as exchange control approval.

The revamp will focus on the Clock Tower precinct, the Fruit Court and the construction of parking space around the Allan Gray head office.

Norbert Sasse, CEO of Growthpoint, said: “The significant value potential to be unlocked through the development of the approved bulk at the V&A Waterfront was always a key component to the transaction.

“More than being the premier property asset in Africa, the V&A Waterfront has all the performance fundamentals in place. It enjoys robust demand across all sectors, with lower vacancy rates than anywhere else in the country and benefits from significant net income growth.”

The revamp will be the biggest business development at the V&A in over two decades.

PIC is involved in the deal as representatives of the Government Employees Pension Fund (GEPF). PIC manages R900-billion ($133-billion) worth of assets belonging to public workers.

Arthur Moloto, chairperson of the GEPF, said: “The V&A Waterfront acquisition has ensured that the ownership of one of the most prestigious properties in South Africa is again vested in the hands of South Africans, and specifically the South African worker base, in the form of 1.2-million public servants who are members of the GEPF.”

The revamp comes at just the right time, coinciding with Cape Town being chosen as a top tourist and cultural destination.

Recent examples include the launch of the latest James Bond novel, Carte Blanche, which is set in the city. Several high-profile films have also been shot on location in Cape Town, including Denzel Washington’s Safe House.

In addition, Tripadvisor named Cape Town the number-one destination in the world in their 2011 Traveller’s Choice Awards.

Through the V&A deal, Growthpoint, the largest listed property company in South Africa, has raised its assets to R40-billion ($5.8-billion), while the GEPF’s investment in the Western Cape has risen from 12% to 30%, solidifying its presence in the retail sector.

Not far from the V&A is Cape Town’s iconic Table Mountain, which is in the running to become one of the world’s seven most spectacular natural sites in the New7Wonders of Nature campaign.

The landmark faces stiff competition from 28 other finalists, including the Amazon in South America, the Bay of Fundy in Canada and the Cliffs of Moher in Ireland. The only other competitor from Africa is Mount Kilimanjaro in Tanzania.

The New7Wonders of Nature campaign began in 2007 after the successful campaign to find seven new built wonders of the world.

After a vote by more than 100-million people, the new seven built wonders were announced as the Statue of Christ Redeemer in Brazil, the pyramid at Chichen Itza in Mexico, the Roman Colosseum in Italy, the Great Wall of China, the Taj Mahal in India, Petra in Jordan – which used to be the capital of the Nabataean empire of King Aretas IV, and the Incan city built in Machu Picchu in Peru.

Bernard Weber, president and founder of the New7Wonders Foundation, said: “We are finding the New7Wonders of Nature campaign to be excitingly different from the first campaign. So many breathtakingly beautiful, natural places are still quite unknown to many. From waterfalls to fjords, rainforests to mountain peaks, freshwater lakes to volcanoes, we are discovering together the incredible beauty and variety of our planet.”

People can vote for Table Mountain online or send the message “Table” to 34874, as often as possible.

The results of the vote will be announced on 11 November 2011.