Leslie Sedibe will feature on the next instalment of Brand South Africa’s Play Your Part TV series, to air on Sunday 24 August on SABC2 at 9pm 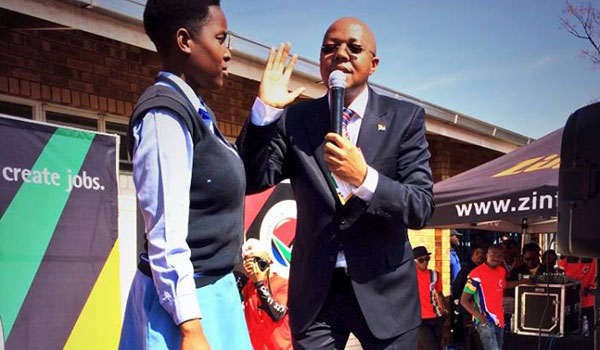 Social cohesion will only come on the back of economic success, says Leslie Sedibe, the chief executive of Proudly South African. The country faces massive challenges of unemployment, poverty and growing inequalities, he points out. The simplest solution is to buy local as this will grow the economy and increase jobs.

Sedibe is an advocate, and holds a BA, LLB and LLM (Tax) from Wits University. Before joining Proudly South African, he was heavily involved in the football World Cup in South Africa in 2010. He was the head of legal of the 2010 FIFA World Cup Local Organising Committee; during the championship he was the chief executive of the South African Football Association (Safa), and chairperson of the National Rights Protection Programme.

In addition, he was on the boards of Safa and the Local Organising Committee. Other boards on which Sedibe has served include EMI and the SABC. He was the deputy chairman of the Film and Publication Board and chaired the board of the Recording Industry of South Africa and the South African Music Awards, or Samas. Added to his business acumen, he is a passionate activist and introduced the Ubuntu Schools Campaign against sexual violence and bullying in schools.

This project is about national identity and the need to encourage people to buy South African goods, Sedibe says. “This job’s not just about patriotism; it’s about investing in the country, about job creation.” Buying local will boost the economy and, in turn, job creation.

Sedibe’s main task is to ensure that South Africans are proud of that which makes this country great. If it were up to him, he would introduce a rule that compelled South Africans to buy local every time they shopped, particularly for clothing. He laments that thousands of people lost their jobs in the textile industry partly because a number of South Africans chose to buy imported designer labels. But he believes the campaigns he leads at Proudly South African will go a long way in educating South Africans about the importance of choosing locally produced goods and services.

First conceived at the Presidential Job Summit in 1998, the Proudly South African campaign was born out of a socio-economic need to create jobs, under the leadership of Nelson Mandela. Mandela was the president of the country at the time. Through the National Economic Development and Labour Council (Nedlac), the campaign was launched in 2001 and supported by the government, organised business and labour. It promotes national pride, patriotism and social cohesion.

“I think that South Africa needs more and more people to dedicate themselves and their lives to better position South Africa. One of the things that really strongly influences me is what Madiba spoke about in parliament after 10 years of democracy. He said his wish for South Africa was that South Africans should never give up on the belief in goodness,” Sedibe says.

Under his leadership, Proudly South African has been vigorous in its “buy local” campaign and many seem to be heeding the call. The campaign seeks to promote South African companies, products and services which are actively helping to create jobs and economic growth.

Sedibe is adamant South Africans will never see the value of a South African product unless they have pride in who they are and their creativity.

The aim of the project is to drive home the message to the youth that abuse and violence are not acceptable, he explains. “We owe it to the generations who went before us to make this country a better place for all who live in it. And we certainly owe it to the generations of South Africans to come. We owe it to ourselves and our fellow countrymen and countrywomen to live out the principles of ubuntu. We need to get back to basics and learn, teach and practise humanity, respect, humility, kindness, love and self-control.”