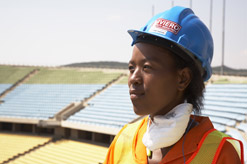 A worker at the Royal Bafokeng Stadium
in North West, which is being refurbished
for the 2010 Fifa World Cup. The South
African government is to spend millions on
infrastructure development, which is seen
as crucial for job creation and turning the
economy around.
(Image: Hannelie Coetzee,
MediaClubSouthAfrica.com. For more free
photos, visit the image library.)

As the international economic crisis continues, South Africans are not going to be left out in the cold.  Proposed interventions by a joint government, business and labour task team will help buffer individuals, industry and business against the worst effects and ensure the country is ready to take advantage of the next upturn.

South Africa’s response includes a number of plans to avoid massive job losses. At a recent meeting of the Presidential Joint Economic Working Group, government announced its intention to pledge R10-billion (US$1-billion) over the next three years as part of an initiative to save jobs during the international economic crisis.

A special national jobs initiative is one development on the cards. Led by the Presidency, it will bring together a range of new and revamped separately administered programmes.

It will also bring together development finance institutions such as the Industrial Development Corporation and government departments such as Public Works, Labour and Trade and Industry. It will coordinate and fast-track financing of industrial and special employment and social measures to avoid job losses.

Parties committed to a jobs strategy that would respond to any contemplated large retrenchments (defined as more than 50 employees) through a mixture of support measures from the Trade and Industry Department and other government agencies.

Training and skills development is listed as a top priority. Employers would be encouraged to avoid retrenchments and retain people who could lose their jobs. Skills development opportunities would be offered to workers who would ordinarily face retrenchment. These programmes will be introduced in such a way as to keep people in employment, but reskill them as an investment for future economic recovery.

The Expanded Public Works Programme has also been identified as an important tool to provide employment to those who are not currently absorbed into the labour market. With Phase 1 of the programme having already created 1-million jobs, Phase 2 is expected to create an additional 2-million full-time jobs.

In an attempt to create stable employment, government will also be discouraged from outsourcing and using casual labour.

Sanlam chief economist, Jac Laubscher, said other measures to avoid retrenchments such as job sharing, longer leave and salary cuts are valid proposals. In fact, such measures have been introduced elsewhere in the world with great success. However, he said implementation could be more difficult as it will be a matter between employers and employees.

The task team report also recommended a macroeconomic response. Measures include using the National Economic Development and Labour Council (Nedlac) forum to enter into discussions with the Reserve Bank on the interest-rate regime and ways of lowering the cost of capital.

Labour, business and community stakeholders have also tabled proposals to introduce tax relief for low-income workers, the poor and companies in distress. These plans and their implications will come under discussion soon.

“The most important thing that government can do is provide macroeconomic stimulus,” he said, adding that such measures have already been put in place in the budget.

Furthermore, he said that a reduction in interest rates is another important way to stimulate the economy. South African Reserve Bank governor Tito Mboweni and the monetary policy committee are expected to cut interest rates by a full percentage point for the second time this year, reducing the repo rate to 9,5%. The cut is likely to come when the committee meets in mid-April; they may even cut it sooner at an unscheduled meeting.

Professor Harry Zarenda from the School of Economics and Business Sciences at Wits University agreed that the budget expenditure directed at infrastructure and social upliftment is substantial.

“My argument is that the slowdown in the world economy represents a breathing space for South Africa to get its house in order and take advantage of the turnaround when it occurs,” Zarenda said.

He added that South Africa is in a good position to respond to the economic crisis: “South Africa can take these measures to protect our economy and the poor because in previous years we handled our finances with discipline. We saved money when our economy was doing well.” As a result, South Africa can increase spending on public services without hurting the economy.

Another major concern is the threat of de-industrialisation. To avoid this, the task team has proposed industrial and trade policy measures. Sector-specific strategies will be introduced to help vulnerable sectors that are facing major job losses and company closures.

Strategies will include a plan of action for sectors with declining competitiveness and performance. Some of the vulnerable sectors indentified include clothing, textiles and footwear, mining and the auto sectors, agriculture, private services and construction. According to the document, the Department of Trade and Industry will finalise proposals with labour and business in these sectors to provide a rescue package to the affected industries.

Doret Els, an economist with the Efficient Group, said although construction is one of the smaller sectors in South Africa, it is receiving significant support through local infrastructure development. Els said the auto sector is a large export product and its performance and production will largely depend on how the international economy recovers.

Laubscher pointed out that support for specific industries must be approached with caution given the fact that the budget already provides significant fiscal stimulus. Rescuing industries that are perhaps not running their business properly could be dangerous.

“The size of our fiscal stimulus is one of the biggest. If you add the decline in interest rates, there will be a lot of stimulus in the economy,” he said.

He added that the current contracting economic climate is a necessary part of the economy as it will put a stop to inefficiencies created during better economic periods.

A number of other interventions have been proposed: one of them is getting tough on illegal imports into South Africa to help local companies retain jobs and stay afloat through the slowdown.

Industries can also capitalise on the negative effects of climate change by developing strong capacity in green technologies and industries. This includes a plan to develop and invest in a programme to create “green jobs”. Government will be tasked to develop a proposal for greening of existing manufacturing and service activities.

The electrical and electronics, engineering and building material industries, already identified as showing early signs of distress, will also be assisted.

The report suggests that development finance institutions would need to play a significant role alongside government in order to save jobs and keep the South African economy buoyant.

“South Africa’s banking system is still working even though they have tightened their lending standards,” he said. There is a danger that companies who can’t obtain finance from banks could get finance from development finance institutions instead, even if the business is not viable.

Zarenda added that he is somewhat skeptical about how the interventions will be financed and the ability and capacity of the working group to successfully implement them. But he said the plan is interesting because it is similar to those presently adopted in the US and Europe in terms of its protectionist bias.

“Given the present climate in the world economy it will be more readily accepted in principle,” he said.

Els said that although the plan is not that detailed, government should be commended for interacting with business and labour about the economic crisis.

“It is a step in the right direction for South Africa,” she said.