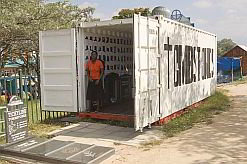 Small businesses like this tombstone
seller from Hoedspruit in Limpopo
can expand their business with
funding from the NEF.
(Image: MediaClubsouthafrica.com. For
more free photos, visit the image library) 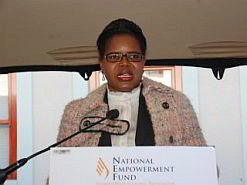 The National Empowerment Fund (NEF), an agency of the Department of Trade and Industry, has launched the Enterprise Development Fund (EDF) to fund small, medium and micro black enterprises with loans ranging between R250 000 (US$37 000) and R75-million ($11-million).

The only difference between the EDF and other agencies of the department is that the EDF raises its funds from contributions by big businesses, who will invest 3% of their annual profits in the venture.

This means big business will be helping smaller ones get established.

The NEF has already received funding of R2.3-billion ($298-million) from the Treasury, and is looking forward to a potential cash injection from the top 40 companies on the Johannesburg Stock Exchange. This sum could exceed R5.3-billion ($749-million).

She said that the fund aims to bridge the gap between advantaged and disadvantaged citizens – “not by taking from the haves, but saying how we can partner to empower the have-nots.”

By donating 3% of their profits, private businesses will earn points as a measured entity under the Broad-based Black Economic Empowerment Act of 2003, which states that contributing companies will earn a 15% weighting towards 100% compliance.

The funding is voluntary but if businesses do not comply, they face losing their empowerment accreditation points.

Contribution will result in certain tax advantages – businesses that do comply will receive a tax benefit of up to 10% off their taxable income because the NEF is tax-exempt, so companies that invest in the fund will not be subject to a donations tax.

Lawrence Mavundla, president of the National Federated Chamber of Commerce and Industry, said: “The law states that companies should contribute 3% towards enterprise development and 2% should be allocated to corporate social investment.”

Mavundla expressed his hope that big corporate will be willing to contribute to the fund.

“I hope the NEF will also provide post-funding mentorship to help these small black companies to grow,” he added.

Because a lack of expertise and knowledge is a threat to the survival of small companies in a competitive industry – and many of them do succumb even after funding – post-funding mentorship is seen as a solution to this problem.

Major groups such as Volkswagen, Chrysler, Bank of America, Merrill Lynch, Nestle and Edcon have expressed interest in the fund, said the NEF.

“To invest in the fund a company needs to sign a letter of participation, agreeing to pay over a minimum contribution of R5 million ($747 000),” said Buthelezi.

South Africa has a number of agencies aimed at boosting small businesses.

They include the Small Enterprise Development Agency, which provides business development and support services for small enterprises; Khula Enterprise Finance, which is involved in funding small to medium enterprises; the Industrial Development Corporation, and others.

The inclusion of young entrepreneurs into the economy is also a national priority, supported by entities such as the National Youth Development Agency (NYDA).

With its primary target group aged between 14 and 35 years, the NYDA seeks to reduce unemployment in this age bracket, and promote social cohesion.

The NYDA helps young entrepreneurs launch new businesses or to expand existing ones. It was launched on Youth Day, 16 June 2009 by President Jacob Zuma and was the result of a merger between the Umsobomvu Youth Fund and the National Youth Commission.

One of many NYDA success stories is that of 25-year-old Ntokozo Kenneth Ngcobo, who owns Miazi CC, an electrical design and installation company. Miazi boasts a number of big clients such as Eskom and government departments.

Ngcobo said: “I think my electrical engineering diploma and employment experience gave me a solid foundation and enabled me to network with the relevant people.”

He said that his goal for the next five years is to break into new markets, as he currently operates only in his home town of Pietermaritzburg in KwaZulu-Natal.