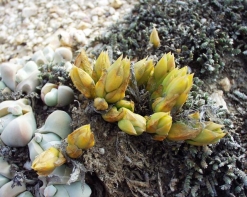 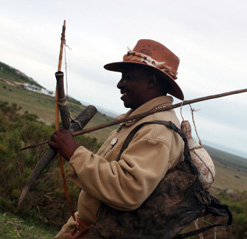 Local San Bushman communities will benefit from a royalty-sharing agreement with a pharmaceutical company which hopes to market a stress-busting product based on a medicinal plant.

The 10 000 members of the communities are participants in South Africa’s first bio-prospecting licence, awarded to Cape-based HGH Pharmaceuticals. Bio-prospecting describes the research conducted into indigenous knowledge and biological resources.

The plant in question is Sceletium tortuosum, also known as kanna or kougoed (Afrikaans, meaning “something to chew”), a ground-covering succulent herb indigenous to Southern Africa.

HGH plans to develop and market, both locally and internationally, an anxiety-relieving extract of the plant under the name Zembrin, to the benefit of the local economy.

New Jersey-based company PL Thomas is expected to distribute the product in the US from the first half of 2011, subject to approval from the Food and Drug Administration.

Bio-prospecting is related to the less scrupulous practice of bio-piracy – this is the appropriation of any form of life and its accompanying indigenous knowledge, to exploit it for commercial gain and without thought for the people who developed and refined the techniques over many years.

The issue is controversial, with some arguing that any claim to ownership of the earth’s biodiversity cannot be supported, and others saying that those who have used natural resources to develop biomedical techniques should rightly benefit from commercial use of those techniques. There are also those who claim that bio-prospecting may lead to bio-piracy.

However, the HGH licence will see the pharmaceutical company paying a yearly royalty fee to the beneficiaries, which include the South African San Council, and the Paulshoek and Nama communities. For the first three years royalties will only be due on net profits of more than R5-million ($500 000).

The San Council will receive the royalties and will pay 50% of the sum to the Paulshoek and Nourivier communities. Also, HGH will carry a logo on the product to acknowledge the local contribution.

Under South Africa’s National Environmental Management: Biodiversity Act of 2004, a permit is required to carry out pharmacological and clinical research on any biological resource, as well as to export any such resource from South Africa. The legislation also stipulates that financial benefits must be shared with the holders of the indigenous knowledge.

The ceremony to mark the official handing over of the permit took place in early October at the !Khwa ttu San Cultural and Educational Centre, near Yzerfontein, a tranquil fishing village on South Africa’s west coast.

Addressing the gathering, Minister of Environmental Affairs Buyelwa Sonjica said the initiative was especially fitting as 2010 is the International Year of Biodiversity. In terms of the number of endemic species of mammals, birds, reptiles and amphibians, South Africa is the fifth richest country in Africa and the 24th richest in the world.

The country is one of 193 parties to the Convention on Biological Diversity (CBD), a legally binding treaty designed to protect life on earth. The convention came into force in 1993, and its secretariat is based in Montreal, Canada.

“I believe that this project will contribute in advancing the ongoing negotiations of the Protocol on Access and Benefit Sharing under the CBD which is due for adoption in the upcoming 10th meeting of the Conference of the Parties to be held in Nagoya, Japan, this month,” said Sonjica, adding that the initiation of the project was an auspicious occasion.

In the past, she said, a lack of relevant policy has led to free access to South Africa’s vast biological resources and indigenous knowledge. The harvesting of these precious resources, sometimes in excessive quantities, has benefited only those foreign institutions who have taken the knowledge for their own financial gain.

This absence of policy has also hindered the implementation of meaningful benefit-sharing for the country’s poorer communities – but since the change of government in 1994, a number of strategies, policies and programmes as well as legislation have been developed to manage biodiversity, including medicinal plants. These regulations are now administered at national, provincial and municipal level.

The HGH permit, said Sonjica, was carefully evaluated and all parties were consulted in the drawing up of the benefit-sharing agreement. Of 52 bio-prospecting applications submitted to the Department of Environmental Affairs, only two were approved. The licence was granted by Sonjica in December 2009.

San Council chairperson Andries Steenkamp thanked the government for granting the licence, saying that it complied fully with CBD requirements.”This profit-sharing initiative will help support, grow and develop the communities, who are very poor.”

HGH research director Dr Nigel Gericke said his company was honoured to be the first recipient of a bio-prospecting permit. He also explained that the issuing of the license now rendered other kanna-selling initiatives, of which there are several online, illegal.

“This permit allows us to research, commercialise and export a valuable indigenous biological resource, and is a testament to our commitment to working in a socially responsible and environmentally sustainable way.”

HGH will source its kanna supplies from contracted growers, so that wild stocks will not be affected. The labour-intensive operation will also create jobs for local people.

“We’re positioning the product for everyday people who are having a stressful time in the office, feeling a bit of social anxiety or tension, or are in a low mood,” said Gericke.

Sceletium tortuosum has been used for medicinal purposes for hundreds of years by San Bushmen, at least as far back as the 17th century, said Sonjica.

In 1662, 10 years after his arrival in the Cape, Dutch colonial administrator Jan van Riebeeck bartered with locals and received kanna and sheep from them.

Later, Van Riebeeck’s successor Simon van der Stel noticed that the plant had a curious, almost intoxicating effect on the locals who chewed it, and described it in his journal.

He studied the effects of kanna, and noted the trade value placed on it by the locals. “They come far and near to fetch this shrub with the root, leaves and all, which they beat together, and afterwards twist them up like pig-tail tobacco; after which they let the mass ferment and keep it by them for chewing, especially when they are thirsty,” observed the botanist in 1774.

Kanna may be chewed, brewed as a tea, smoked, or taken as snuff. It is able to reduce stress, elevate moods, induce relaxation, and relieve hunger and thirst, and is said to contain a number of alkaloids including mesembrine, mesembrenol and tortuosamine. These compounds interact with the brain’s dopamine and serotonin receptors to alter the mood.

Although it works on the central nervous system, botany professor Ben-Erik van Wyk of the University of Johannesburg said his research into the plant did not reveal any adverse effects or potential for dependency.

“So often traditional remedies are looked down upon as old-fashioned and outdated,” he said. “If this product becomes a huge success, the San Bushman culture will become more respected and better known.”