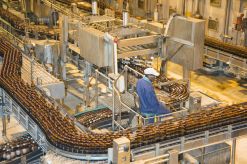 SABMiller was one of the companies that
represented South Africa in SA-US trade
dialogue.
(Image: MediaClubSouthAfrica.com. For
more free photos, visit the image library)

South Africa and the US are set to strengthen trade and investment ties following the outcomes of the Africa Business Summit in Washington DC, which ran from 29 September to 1 October 2009.

The partnership was signed by Business Unity South Africa (Busa) and the Corporate Council for Africa (CCA), which represents 85% of US private-sector investors on the continent.

The US-South Africa business dialogue, co-hosted by Busa and the CCA, took place within the margins of the summit.

It aimed at providing US investors with insight into trading opportunities in Africa and was attended by delegates from South Africa, Rwanda, Nigeria, Kenya, Senegal, Ghana, Uganda, Malawi, Mozambique, Namibia, Sudan, Liberia and Tanzania.

“The partnership will identify future areas of cooperation in order to deepen the trade and investment relationship between South Africa and the US,” said Busa CEO Jerry Vilakazi.

His sentiments were echoed by CCA president and CEO Stephen Hayes, who said it “marked the beginning of a new era in the US-SA bilateral relationship”.

“Specific issues were identified for further discussion in five key sectors, [which are] energy/power, infrastructure, health, IT and financial services,” Vilakazi added.

It is hoped that a clear agenda will be set up within the next few months to help strengthen South Africa’s relationship with the CCA.

“We will also create networking opportunities and make it a priority to strengthen the important economic partnership between our two countries,” said Vilakazi, adding that the agreement will enable the private sector in both countries to “provide input into the Consultative Group on Trade and Investment that was established by the US and the Southern African Customs Union [Sacu]”.

The Consultative Group on Trade and Investment came into force on 16 July 2008 to expand trade and strengthen economic relations between the US and Sacu member countries, which are South Africa, Swaziland, Botswana, Lesotho, Namibia and Swaziland.

The US is South Africa’s second largest trading partner after China, with 8.3% of all South African exports sold in the US in the first six months of the year.

According to statistics released by the DTI, South African exports to the US declined by 42.6% in the first six months of 2009 compared to the same period of 2008. This decline can be expected given the US economic crisis.

But despite the decline, trade relations between South Africa and the US remain sound.

There are two specific programmes which grant South African products preferential access to the US market. The first is under the Generalised System of Preferences, which grants duty-free access for more than 4 650 products.

The second is under the African Growth and Opportunity Act introduced in 2000 by then US president George W Bush. The purpose of the legislation, which expires in 2015, is to assist the economies of sub-Saharan Africa and boost trade and other economic relations with the region.

South Africa and the US also signed the Trade and Investment Framework Arrangement (Tifa) in 1999. Such frameworks are formal arrangements under which the US and another country, or bloc of countries, can discuss issues related to trade and investment.

The SA-US Bilateral Cooperation Forum, which was set up in 2001, is a further mechanism used to address trade and investment issues between the two countries.