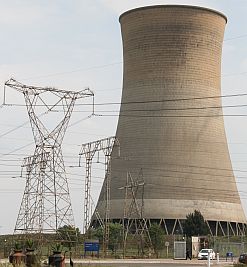 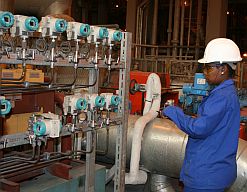 About 40 000 jobs will be created
through Eskom’s expansion project.
(Images: Bongani Nkosi)

Eskom introduced the programme in 2004 to guarantee an efficient, reliable electricity supply.

“As government, we will continue to work with Eskom to ensure that the build programme is completed on time, and that there is security of electricity supply,” Gigaba said in his speech at the release of Eskom’s interim results on 23 November 2010.

“We will continue to support Eskom as it undertakes this crucial task,” he added.

Billions of rands are being pumped into the programme to keep it on track. Eskom said it’s now sure that it will have R440-billion in funding for the next seven years. This includes loans of R160-billion from debt capital markets and R100-billion from development finance institutions and export credit agencies.

“We now have the certainty we need to go ahead with the build programme,” Eskom’s CEO Brian Dames said in a statement.

The government announced in October that it will expand its guarantees for Eskom by R174-billion to R350-billion. The guarantees had initially been set at R176-billion.

Gigaba said the government had in recent years provided a R60-billion loan to Eskom as part of its funding drive.

Minister of Finance Pravin Gordhan is expected to officially announce the government’s equity injection of R20-billion for Eskom in his budget speech in February 2011.

“This investment is massive, it is the largest this country has ever seen,” Gigaba said of the build programme. “Once complete, it will ensure that we are on a firmer footing to place this country’s growth and employment levels on a higher trajectory.”

Since adopting the programme, Eskom has added 5 032MW of power-generating capacity to the country’s grid. Transmission lines totalling 3 400km have also been added, according to the utility.

It has revived mothballed plants like the 1 520MW Camden power station in Ermelo, Mpumalanga, while plants in Grootvlei and Komati, also in Mpumalanga, have been partially re-commissioned.

The expansion project will result in an additional 12 300MW being added to the national grid between 2012 and 2017.

Eskom’s ultimate aim is push up South Africa’s power capacity to 80 000MW by 2026, so expansion projects will continue after 2017.

Major power stations are currently under construction. The first unit of the coal-fired 4 800MW Medupi power station in Limpopo will be commissioned at the end of 2012.

Contractors for the construction of Kusile power station in eMalahleni, Mpumalanga, are being appointed. Eskom is now confident that the 4 800MW coal-fired station will be commissioned at the beginning of 2015.

Construction of the Ingula pumped storage scheme is well under way at the Bedford and Braamhoek dams. The two dams are 4,6km apart in the Free State and KwaZulu-Natal provinces respectively, and they will be linked by underground waterways.

The new hydro-power station will generate an extra 1 300MW of power when commissioned at the beginning of 2014.

South Africa received a rude awakening in 2007 and early 2008 when Eskom experienced difficulty in meeting the country’s growing power demands and widespread blackouts ensued. The crisis spurred the huge investments in the build programme.

The utility said it’s been able to control the situation since 2008, and has avoided further blackouts. “We are proud of the fact that we have kept South Africa’s lights on since April 2008, and we are determined to maintain that record,” said Dames.

Gigaba urged the state-owned enterprise to keep the momentum: “We are fully aware of the challenges that still remain in the electricity sector, and we therefore urge the company not to become complacent. There is still a lot of hard work that still lies ahead.”

The expansion project will have created more than 40 000 jobs by 2017, with scores of South Africans already having found employment in the various projects.