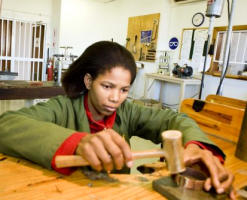 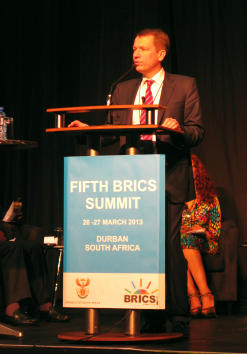 RELATED ARTICLES
• Brics summit in the spotlight
• South Africa at 2011 BRICS summit
• Zuma: shared prosperity for all
• Brics journos get to know SA

Beneficiation was not an obstacle in Africa, but rather an opportunity, Bridgette Radebe, chair of the South African Mining Development Association, told delegates at the fifth BRICS summit at Durban’s International Convention Centre on Tuesday.

Top-level delegations from all five BRICS countries (Brazil, Russia, India, China, and South Africa) are in Durban for the summit to talk about co-operation, development and economic growth. South Africa has been a BRICS member since 2010.

South Africa holds an estimated US$2.5-trillion (R23-trillion) of mineral resources, making it the world’s richest country in this regard, according to a 2010 report commissioned by US banking group Citigroup.

The country also has the world’s largest reported reserves of gold, platinum group metals, chrome ore and manganese ore, and the second-largest reserves of zirconium, vanadium and titanium.

Despite these assets, South Africa – along with other African countries – lags in mineral beneficiation, exporting its minerals as unprocessed ore rather than higher-value finished products.

“Many countries that are resource-rich seek to improve their revenue through taxation. They should consider that beneficiation may be a more effective option,” said Abiel Mngomezulu, the chief executive and president of Johannesburg-based mineral processing company Mintek, and moderator of the panel discussion on beneficiation.

According to Deloitte, the gross revenue from sales of all minerals in South Africa for the 2010 financial year amounted to $24.5-billion (R227-billion). But only $9-billion (R86-billion) was generated from processing base metals, precious metals and other minerals.

South Africa’s government has named beneficiation as a priority for job creation and economic growth. In 2011 it released a strategy that identified policies, legislation and incentives that could be put in place to grow the industry and give the country a greater competitive edge. Beneficiation is one of six focus areas in the New Growth Path, which aims to create five-million new jobs by 2020.

“Under colonialism or imperialism, BRICS nations were not viewed as countries that should industrialise – instead the powers took what commodities they could and shipped them home. Now the world realises that we have to develop our own industries.”

To successfully meet the challenge of building a beneficiation industry, he said South Africa needed to invest in resources – capital, power, infrastructure, skills and education.

Co-operation between BRICS countries could help this along. “Investment in Africa is one of our top priorities, and South-South co-operation will improve the African economy,” said Jiang Huicheng, the president of China’s First Investment Holding Group.

Jiang said investment in mining would have the added effect of boosting crucial infrastructure such as rail networks. “We strongly support local industry,” he said.

Jiang dismissed rumours that China planned to strip Africa of its mineral resources. “Our long-term target is to help African countries and also give small and medium enterprises a hand, and we are committed to this. We have been investing in Africa for over a decade.”

Jiang cautioned that the environment for this kind of investment in Africa was not yet optimal. “Governments must show support for the mineral industry to attract more foreign investment.”

The South African government has singled out 10 minerals which it believes have the greatest potential for value through beneficiation: chromium, manganese, coal and uranium, nickel, diamonds, platinum, gold, titanium, iron ore and vanadium.

There are five value chains associated with these commodities, namely:

“This is part of the green revolution, and the future of energy supply,” she said. “The energy production process is silent, combustion-free and better for the environment. There are implications for residential, automotive and other sectors, and we expect that by 2015 the technology will be commercialised.”

Radebe, who is founder of Mmakau Mining, said there were a range of government-driven incentives available to beneficiation companies and to both greenfield and brownfield initiatives. Incentives and benefits included tax reductions, the development of transport corridors and special economic zones, as well as training allowances.

The Department of Science and Technology also offered incentives for research and development, she said.

Other countries are quick to tap into South African mining expertise.

“Many of our recent improvements have been led by people with a South African background,” said German Pikhoya, the chief executive of Russia’s Polyus, one of the world’s biggest gold producers with the third-biggest reserves on earth.

The company’s chief operating officer is James Nieuwenhuys, who learned his trade at the Gencor Pomfret Mine and then De Beers, where he was project engineer for the development of the Venetia open-pit diamond mine in Limpopo.

“His input helped us to increase our gold output,” said Pikhoya, “and it has been so positive that we will probably internationalise our team even more.”

Polyus is also co-operating with Mintek, he said. “We view South Africa as a mining superpower.”