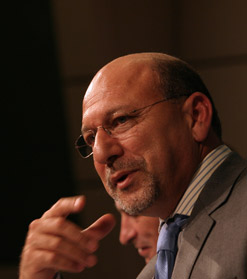 That’s the view of Finance Minister Trevor Manuel during his announcement of the country’s 2008/2009 budget allocations at a sitting of Parliament on Wednesday 20 February.

“It is precisely because of the macroeconomic policies in place since 1996 and the fiscal stance in operation that we can be confident that we will weather this storm,” he said. “Key policy anchors are in place to provide a solid mooring while enabling the economy to adapt to the cross-currents.”

The South African economy has expanded continuously since September 1999 slowing slightly in 2001 and 2002. Gross domestic product has increased by around 5% since 2003 – the longest uninterrupted period of growth on record for the country.

A pressing issue for Manuel was the country’s high level of unemployment. He acknowledged that despite the implementation of several job-creation programmes the economy was still feeling the knock of joblessness. He said the government’s response to this challenge needs to be better coordinated, as it is central to winning the war on poverty.

To this end, tax support for small businesses as well as options for a wage subsidy where public funds will be used to reimburse employers was being examined.

Other spending priorities for the year were health, education and social spending.

Over the next three years, South Africa’s nine provinces have over R18 billion to spend on school infrastructure and equipment.

“In 2007/08, education spending in total exceeded R105 billion, rightly signifying that investing in the capabilities on which dignity, self-reliance and social progress are built, is at the centre of our development strategy,” Manuel said.

“And so we have an obligation to ensure that our democracy is invigorated by schools that are equipped and furnished, curricula that are right for our times.”

The expansion of the early childhood education programme, a further 600 000 children will be accommodated in the education system. Also, fewer children will go hungry at school this year as spending on the School Nutrition Programme has increased by over 30% to reach about 7-million children.

Tertiary institutions also got a bite out of the pie, with additional to higher education and the National Student Financial Aid Scheme.

Turning to social security, Manuel announced that an inflation-linked increase in grants currently paid to 12.4-million South Africans will also be put in place. Disability and old age grants will increase by around 8%, while child support grants will see two increases this year – in April and October. These increases alone amount to R12-billion over the next three years.

Male pensioners will also be collecting their grants earlier, with the qualifying pension age for men being reduced from 65 to 63 this year, to 61 in 2009 and to 60 by 2010. As of January 2009, the qualifying age for child support grants will be raised by a year to 15.

As a result of increased salaries and improved training, more than 39 600 health workers have joined the health fraternity over the past four years, Manuel said. A further 25 000 posts will be filled by 2010. More than R1.5-billion will be spent on additional wages for nurses and spending on HIV/Aids programmes will run into the R4.5-billion range by 2010.

In a bid to create synergy between Western and traditional methods of healing, government will look at means to set up clinics and operating rooms for traditional health practitioners.

More money will be spent on the fight against crime. An additional 8 500 police officials will be employed, reaching 200 000 by 2010. The money will also go to modernising the handling and recording of documentation at police stations and courts, and constructing 40 more new police stations.

“While acknowledging that there is much to be done to improve law enforcement and courts administration, the statistics show that progress is being made and we are mindful of the debt we all owe to those whose work involves exposure to danger and heavy caseloads,” said Manuel.

Apart from the R7.7-billion tax relief for individuals, corporate taxes have been cut by 1% to 28%, a move expected to spur on investment.

Good news for small businesses with a turnover of less than R1-million was that a presumptive turnover tax will be charged as an alternative to income tax and value-added tax.

As he does every year, Manuel again raised what is known in South Africa as the “sin taxes”, with consumers having to cough up more for cigarettes and alcohol. Cigarettes will go up by 66c, while alcohol will increase by up to R2, 17 for spirits.

On the back of the electricity crisis, government has opted to help out electricity supplier Eskom with a R60-billion loan over the next five years to finance their capital investment programmes.

“Eskom’s tariffs were steadily reduced in real terms during the 1980s and 1990s, so that electricity prices in South Africa are now far lower than in any other comparable country, and well below full economic cost. The tariff structure is now too low to support the required borrowing,” said Manuel.

About R2 billion has been set aside over the next three years to support programmes aimed at encouraging more efficient use of electricity and generating energy from renewable sources.