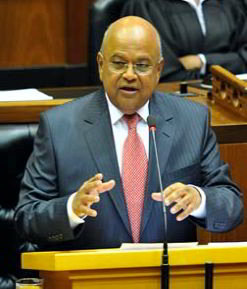 South Africa’s medium-term budget, recently presented by Minister of Finance Pravin Gordhan against the backdrop of the fiscal crisis in Europe, was well received by numerous financial analysts and the business community.

According to Business Unity South Africa (Busa), the overall message of the medium-term budget is positive for business confidence.

In a statement, Busa said it was pleased with Gordhan’s realistic assessment of the country’s economy and the external and internal factors affecting South Africa’s economic performance and outlook.

In an important move to encourage investment in South Africa and Africa, Gordhan announced changes to create a more competitive investment environment that would also reduce the cost of doing business.

The National Treasury proposed changes to local listing rules on the Johannesburg Stock Exchange (JSE) that all inward listed shares on the JSE are to be classified as domestic. This means that foreign companies listed on the local stock market will be traded without limits.

Gordhan’s proposal is intended to enhance the ability of the JSE to attract new listings and boost investment in Africa.

“We have also agreed on several reforms to improve South Africa’s position as a financial gateway into Africa and facilitate cross-border transactions,” he said in his speech.

Steps will also be taken to simplify procedures and reduce the cost of cross-border money remittances, particularly to neighbouring countries and the rest of Africa.

Russell Loubser, CEO of the JSE, welcomed the minister’s announcement. “We very much appreciate the thoughtful and careful manner in which National Treasury and the Financial Services Board have engaged on this issue, which clearly has an important impact on the markets,” Loubser said in a statement.

He added that the move will further improve the reputation of the country’s markets by enabling the JSE to more aggressively pursue a wider range of investment possibilities.

According to Moneyweb, South Africa’s exchange-control rules currently limit the number of foreign assets listed on the JSE that local individual and institutional investors may own. This is known as prudential limits.

With the new proposal there will not be a regulatory burden to list on the JSE.

AJ Jansen van Nieuwenhuizen from Grant Thornton Advisory Services said government’s intention to simplify procedures and reduce costs relating to cross-border money remittances, particularly to neighbouring countries and the rest of Africa, will be positive for the country.

“It will provide a much-needed boost to South Africa truly becoming a gateway to Africa,” Jansen van Niewenhuizen said.

Gordhan announced that the government is to place more emphasis on funding the development of long-term infrastructure.

“Infrastructure projects in energy, roads, rail, telecommunications and water will ease bottlenecks and reduce costs in the rest of the economy, crowding in private investment and improving access to export markets,” Gordhan said.

Public-sector investment in infrastructure, which has increased from 4.3% of the GDP in 2005 to 7.5% in the first half of 2011, is still central to the government’s economic development plans.

Over the next three years the government plans to spend R802-billion on infrastructure. The largest share of funds will be allocated to energy, transport and logistics, water and sanitation.

Included in these investments are Eskom’s capital expenditure programme, which is expected to double electricity generation by 2025, and the expansion of bulk freight rail, which will help raise transport volumes from 47-million tons to 60-million tons.

He also said that Treasury plans to provide R25-billion over the next six years to stimulate industrial development zones, boost investments in enterprises and job creation, support green initiatives and to get the private sector to partner with the public sector to invest in infrastructure.

The minister also proposed that R25-billion be made available over the next six years to boost industrialisation, but he said that how the funds are implemented is important.

The package would include temporary mechanisms to strengthen productivity and innovation in industries that have demonstrated long-term competitive potential.

Raymond Parsons, deputy chief executive of Busa, told Bua News that it was important for government to collect the R25-billion under a fund focused on competitiveness.

“That puts the focus where it belongs. If South Africa really wants to grow, create jobs and address poverty, it’s important that our competitiveness in the world economy is increased and strengthened,” Parsons said.

According to Global Advisors, a strategy and management consulting organisation, numerous ratings agencies have responded positively to the medium-term budget.

Although the South African Treasury has made downward revisions to growth estimates and announced a delay in cutting the budget deficit, Fitch Ratings described South Africa as “fine”.

Veronica Kalema, director of sovereign and international public finance at Fitch, said that the problems the country was experiencing were “due to the global environment, which is having a negative impact on most countries”.

In investment, BBB ratings refer to the bond credit rating that assesses the credit worthiness of a corporation’s or government debt issues. The credit rating is a financial indicator to potential investors of debt securities such as bonds.

Reuss said it is important that the Treasury has maintained its policy commitment to a medium-term fiscal consolidation and debt burden reduction.

Chris Hart, an economist at Investment Solutions, was quoted saying that “South Africa looked a model of stability”. He added that in comparison with many “advanced economies”, South Africa did not have a problem with its banking system.

• At the time of publishing the dollar to rand exchange rate was US$7.8 = R1