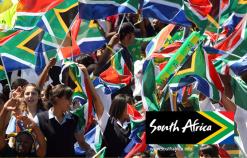 “South Africa: Inspiring New Ways”, the new slogan for championing the country locally and internationally, has been approved by the country’s Cabinet following extensive development and consultation by Brand South Africa.

Minister in the Presidency Collins Chabane made the announcement on Thursday following the Cabinet’s fortnightly meeting in Cape Town on Wednesday.

Brand South Africa, the organisation charged with marketing South Africa at home and abroad, will drive the popularisation of the new slogan, Chabane told reporters in Pretoria.

The new slogan replaces the previous “Alive with Possibility”.

“It’s a description of the best of our national character, our values and the fabric of our people,” said Brand South Africa CEO Miller Matola in a statement.

“It is a challenge to all South Africans, from business, government and civil society, to build on our reputation for inspiration and innovation.”

As part of the development process, Brand South Africa consulted broadly and held discussions with all interested parties, including the government, business, civil society and the general public, said a statement released by the organisation.

Research and surveys helped to ensure that the process was going in the right direction.

The final slogan was chosen from a shortlist of five, each of which was thoroughly tested locally and internationally.

Championing SA at home and abroad

Brand South Africa is best known locally for its Play Your Part active citizenship campaign, and its precursor, the hugely successful Football Fridays campaign that inspired the nation in the build-up to the 2010 Fifa World Cup.

Internationally, Brand South Africa lobbies and networks extensively among global opinion leaders to shift perceptions about the country and the continent.

Most recently, the organisation teamed up with London’s Financial Times to host a roundtable discussion on the future of mining in Africa at last month’s Mining Indaba in Cape Town.

The month before that, Brand South Africa partnered with Time magazine in bringing global business and political leader together to discuss the role of Africa in the global transformation at the World Economic Forum in Davos, Switzerland.

The organisation also regularly brings groups of international journalists to the country to give them the chance to contact South African government and business, experience local life and culture, and learn about the country’s latest technological developments.

SA climbs in the brand rankings

Its efforts have not gone unrewarded. In the latest release of the prestigious Anholt-GfK Roper Nation Brand Index, made in October, South Africa moved up one spot to 36th out of 50 countries measured, confirming the steady improvement in the country’s brand reputation.

The index is based on an annual online survey conducted among respondents from 20 “panel” countries in which the 50 competing nations are ranked along six dimensions: tourism, culture, people, exports, governance, and investment/immigration.

For Brand South Africa, this meant continuing to focus on positioning the country more as a business destination and an attractive emerging market on the African continent, Matola said.