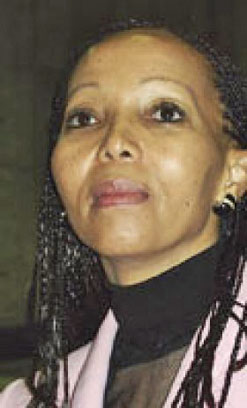 The stylish and extremely well-connected
Bridgette Radebe is the Global Foundation
for Democracy’s Businessperson
of the Year.
(Image: Mining Weekly)

The Global Foundation for Democracy honoured South African mining entrepreneur Bridgette Radebe, the country’s first woman to excel in this sector, as their 2008 Businessperson of the Year at a function in Johannesburg in May 2008.

Radebe, who is the sister of billionaire Patrice Motsepe, himself a renowned gold mining magnate and one of the world’s wealthiest men, is married to Jeff Radebe, South Africa’s minister of transport. She is recognised as one of South Africa’s most powerful businesspeople and to date is the only woman at the helm of a deep mining company.

The well-connected Radebe received her award from Kazakh billionaire Alexander Mashkevich, whose company Alferon Management has mining operations in several countries, a number of them in Africa.

The citation for Radebe’s award describes her as a “heroic women and a born entrepreneur who defied legislation to build her own successful mining group. She is an economic activist, an agent of transformation and a pioneer of change who has played a key role in changing exclusionary mining legislation in South Africa and who pioneered the implementation of empowerment mining models in Africa and internationally.”

The mission of the Global Foundation for Democracy is to educate the public about the benefits of using democracy as a means of achieving global peace and cooperation. The award is presented to individuals who have made a difference in an ever-changing political and environmental landscape. Among its past winners is former South African president FW de Klerk, who jointly won the Nobel Peace Prize in 1993 with another former president, Nelson Mandela.

Determined to forge ahead in the mining sector

Radebe heads the Mmakau Mining company, which besides its core business has shares in numerous other enterprises. Mmakau focuses on gold, platinum and coal mining. It is named after the village in North West Province where Radebe grew up, and it was the exploitation of her people’s mineral rights that determined her choice of career. Mmakau was established as a company in 1995 after Radebe had gained considerable experience as a mining contractor.

It wasn’t long before the company took on ownership of its own mines and entered into a partnership with Shaft Sinkers, broadening its scope to include shaft sinking, and mining design and construction. Today Mmakau has a 7% share in Marula Platinum, a 30% share in Madibeng Platinum, a 25% share in Shaft Sinkers, and a 25% share in Dorstfontein coal mine, among several others. It has also diversified into ferrochrome with a 6,5% stake in the Hernic ferrochrome plant near Brits.

A pioneer of women in business

Radebe is a political science graduate who obtained her BA degree from the University of Botswana. In 2003 she founded the New Africa Mining Fund, a private equity fund that focuses on investing in junior mining opportunities in South Africa and the broader Africa continent. To date the fund has invested in a range of mining-related resources including gold, kaolin, coal, diamonds, anthracite, silica and platinum.

With her considerable experience in the mining sector, Radebe played an important role in the South African Mineral & Petroleum Resources Development Act (MPRDA) of 2002, which provides for equitable access to and sustainable development of the nation’s vast mineral and petroleum resources. She also had a hand in the creation of the Mining Charter and is credited with ensuring that the charter not only contains empowerment quotas but also a target for gender empowerment.

In addition to her many mining interests, Radebe sits on the board of Sappi, South Africa’s major paper producer. Previously she served on the board of the National Research Foundation.

Radebe was the first president of the local branch of the International Women’s Forum, a global network of women leaders whose members include US Senator Hillary Clinton, South Africa’s First Lady Zanele Mbeki and former British prime minister Margaret Thatcher. The South African chapter was established in 2000.

Radebe also chairs the South African Mining Development Association and in 2007 was appointed as vice chair of the Minerals and Mining Development Board that advises the Minister of Minerals and Energy on matters that relate to the MPRDA, as well as dispute resolution and human resource development in the sector. She will serve a three-year term in this position.

“We continue to forge links between South Africa and mining investors on the African continent,” said Radebe, speaking recently in her capacity as the chair of the Mining Development Association. “Our business commitment is to pursue a code of conduct in Africa that will demonstrate global mining transformation policies in these countries. The next ten years in the history of the South African mining economy will give rise to defining moments in the long walk to economic freedom.”