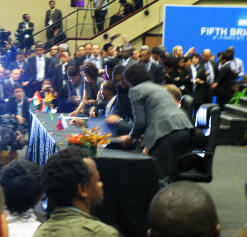 The five leaders and their retinues take their places just before confirming the establishment of the Brics Development Bank. 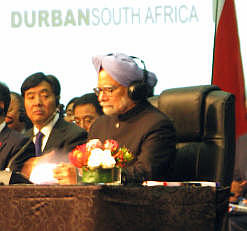 Indian prime minister Manmohan Singh reaffirmed his confidence in the work and purpose of the Brics group.
(Images: Janine Erasmus)

The second day of the fifth Brics summit saw a number of co-operation agreements signed between the attending heads of state in fields ranging from nuclear medicine and military technology to rail transport and the much-anticipated Brics bank.

• A multilateral agreement on green economy co-financing, which was signed by representatives of the Brics Inter-Bank Co-operation  Mechanism, which includes Jabu Moleketi, the chairman of the Development Bank of Southern Africa;

• A multilateral agreement on infrastructure co-financing for Africa, also signed by representatives of the Inter-Bank Co-operation Mechanism;

• The launch of the Brics Business Council, which was signed by representatives of the newly formed council. It’s chaired by South African mining tycoon Patrice Motsepe and is aimed at strengthening and promoting economic, trade, business and investment ties between the business communities of the five countries.

The Brics Development Bank was the issue that had piqued the world’s curiosity, and it was confirmed by all five leaders at a plenary session on day two.

“We considered that developing countries face challenges of infrastructure development due to insufficient long-term financing and foreign direct investment, especially investment in capital stock,” said President Jacob Zuma on behalf of the group.

He said that the finance ministers had done an assessment in early 2012 on whether it was feasible to set up a bank, and that their report had satisfied the leaders that the establishment of the financial institution was viable.

“We have agreed to establish the bank,” said Zuma. “The initial capital contribution to the bank should be substantial and will be sufficient for the bank to be effective in financing infrastructure.”

He added that progress would be reviewed at the Brics group’s next meeting in September 2013.

At the same time a few other new developments were announced, including the establishment of the Brics Think-Tanks Council, a body that will help with speeding up innovation; the launch of the Brics Joint Statistical Publication 2013; and the issuing of the eThekwini Declaration and eThekwini Action Plan.

The declaration is a summary of the Brics countries’ common stance in key issues of global politics and economy, while the action plan provides a roadmap for Brics activity for the next 12 months, including areas of co-operation.

The summit took place under the theme Brics and Africa: Partnership for Development, Integration and Industrialisation.

South African commercial transport company Transnet secured a deal with the China Development Bank which, say media sources, could be worth as much as US$5-billion. This loan will fund the revitalisation of rail networks around the region, used mainly for the transport of commodities such as iron and steel.

Another deal was reached between South African defence equipment manufacturer Denel Aviation and Moscow-based Russian Helicopters. This will allow the state-owned Denel to officially operate a service and maintenance centre for the 600 or so Russian-built helicopters operating across the sub-Saharan region. Denel has years of experience in this field, and has designed and built its own attack helicopter, the Rooivalk.

The centre has already been opened in Johannesburg.

South Africa and Russia are also to work together in nuclear energy and nuclear medicine, particularly in the production of medical isotopes. South Africa is a major producer for the global market of molybdenum 99, which is a marker used in cancer diagnostic techniques.

“Over the last five summits our forum has become more relevant,” said Indian prime minister Manmohan Singh. “We stand to benefit enormously from our collective strengths. We need to exploit our complementarities for mutual benefit and encourage more interaction between institutions in Brics countries to enhance the education, energy, IT, healthcare and other sectors.”

Singh stated that economic development in the bloc should be made more broad-based and inclusive. This, he said, would also help to address instability in vulnerable parts of the world.

“I would like to reaffirm the importance that India attaches to the work of the Brics group,” he said, “not just for our people but for the world at large.”

Singh expressed his conviction that the Brics forum would reach new heights in the years to come.