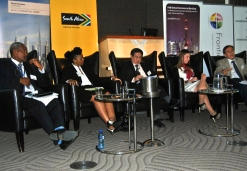 The idea for a Brics development bank could hold great benefits for Africa by using South Africa as a gateway to the continent; but it must be aligned with the private sector agenda or it will become a burden on the state, said expert panellists at a debate hosted by research and strategy consultants Frontier Advisory.

The debate took place on 25 September at the Johannesburg Stock Exchange in Sandton, north of the city centre, and was moderated by Brand South Africa’s research manager Petrus de Kock.

South Africa joined the Brics bloc of developing economies (Brazil, Russia, India, China and South Africa) early last year. The aim behind the creation of a Brics bank is to have a development-focused finance institution to support and drive commerce between the Brics economies.

According to the experts on the panel, the idea of a Brics development bank is politically driven and could remain just an idea unless some sound reasons for creating it are formed.

Attractive idea, but is it necessary?

Windsor Chan, deputy GM of the China Construction Bank in South Africa, said the Brics bank, if it were to be created, must be aligned to the private sector. Frontier Advisory’s head of research and strategy Hannah Edinger said a Brics bank would be useful to facilitate the spread of information as the Brics economies do not know enough about each other.

Brics proposed to set up a development bank with US$50-billion (R411-billion) in initial assets. All five member countries of the Brics group propose to contribute $10-billion (R82-billion) each toward this bank. The bank will mobilise resources for infrastructure and sustainable development projects.

Jointly the Brics countries have a population of three-billion and account for 25% of the world’s GDP. If the idea comes into realisation, South Africa and India have offered to host the Brics Development Bank. However, wherever the headquarters are located, the bank is said to most likely rival the World Bank.

Alexander Tikhomirov, a representative of Russia’s Vnesheconombank in South Africa, said it is very important to establish partners in Africa, as Brics has no structure yet but was set up by political will.

Lumkile Mondi, chief economist at South Africa’s Industrial Development Corporation, told the audience that he does not see a need for a Brics bank. “Politically it’s very attractive … but, I have not yet found a good economic reason why we need such a bank,” he said.

“We need to focus on what we want to achieve from a Brics bank,” said Sinazo Sibisi who is in charge of strategy, marketing and communications at the Development Bank of Southern Africa. “Emerging markets are becoming more and more dominant.”

From an African perspective, Sibisi said, South Africa must ensure that African businesses have access to the opportunities afforded by the Brics bank.

The next Brics summit will take place in Durban in March 2013. The five finance ministers of the Brics nations will elaborate further on the idea of a development bank by the time of the summit.