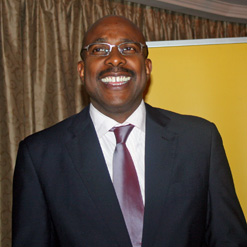 Miller Matola, CEO of Brand South Africa,
at the BRICS roundtable with the FT.
“One way or another this will help us
achieve our country’s development
objectives,” he said.
(Image: Nosimilo Ramela)

South Africa’s ascendance to the BRICS group of major emerging economies is a boost to the country’s brand, Miller Matola, CEO of Brand South Africa (BSA), said at a BSA roundtable discussion with London’s Financial Times on Tuesday.

“One way or another this will help us achieve our country’s development objectives,” Matola said. He added that membership of BRICS – the economic alliance that includes Brazil, Russia, India and China – puts South Africa on the centre stage of global change, rather than on the sideline, he said.

“This helps us as a brand. What it says to the world is, consider us a serious economic player.”

The roundtable event, held at Summer Place in Johannesburg, brought together South Africa’s top business executives and politicians to examine South Africa’s role in BRICS and the opportunities membership presented to the country and the rest of the African continent.

Most speakers made the point that, in addition to South Africa’s strong economy and developed infrastructure, the country’s position as the gateway to the rest of Africa gave it a valuable role in BRICS.

Davies made the point that the ‘S’ in BRICS should actually stand for SADC, and not South Africa, referring to the Southern African Development Community of 15 African states, including Botswana, the DRC, Angola and Tanzania. “This partnership will not only benefit South Africa, but also the continent, as it will open up trade in Africa,” he said.

Speaking before the discussion, deputy minister of International Relations and Cooperation Ebrahim Ebrahim said that while South Africa does not officially represent the continent in BRICS, its membership would give Africa a stronger voice, not only within BRICS, but also across all international platforms in which the BRICS countries are individually represented.

He added that South Africa’s accession to BRICS is a natural fit. “Our positive attributes that put us in a different category include our role as a major economic player in Africa, our mineral and industrial output, our electricity generation capacity, our road, rail, ports, communication infrastructure, our sophisticated financial markets and service industries, our manufacturing capacity, our membership in the G20, and our level of industrialisation,” he said. “All these, and many more, profile us in a very positive way.”

The membership was the result of two years of in-depth planning and joint efforts by the public and private sector, Ebrahim said, adding that South Africa should not underestimate its status as a deserving member of BRICS.

“We agree that we do not have a major world population size in comparison to other BRICS member states, including the high-digit growth rates enjoyed by its BRICS partners,” he said.

“We move from the premise that, there are attributes that fellow BRICS member-states see in us, that we choose to overlook or undermine. We also argue that, if we consistently profile ourselves as that small country on the southern tip of Africa, we will go nowhere.”