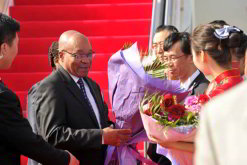 For the first time South Africa is attending a BRICS summit as a full member of the group of emerging nations, after its formal induction into the group earlier in 2011.

The 2011 gathering – the third edition – is taking place on 14 and 15 April in Sanya in China’s Hainan province, under the theme of Broad Vision, Shared Prosperity.

Zuma is accompanied by a strong delegation from business and the government, including the minister of trade and industry Rob Davies, economic development minister Ebrahim Patel, and the minister of international relations and cooperation Maite Nkoana-Mashabane.

Besides the BRICS summit, South Africa is also participating in the BRICS Business Forum and the BRICS Banking Cooperation Mechanism, which take place adjacent to the main event.

The leaders are expected to discuss not only mutual trade ties and topics such as energy, climate and development, but also political issues such as the unrest in North African countries of Egypt and Libya.

According to the Department of International Relations and Cooperation, Zuma will use the event to convey appreciation for South Africa’s invitation to BRICS membership, and to affirm the strategic importance that the country attaches to the partnership.

He will also push for alignment of the BRICS agenda with the development and economic priorities of Africa, which include infrastructure development, and beneficiation of minerals.

The International Monetary Fund has predicted that the former BRIC group will contribute as much as 61% to global growth in three years’ time. Some analysts have expressed surprise at South Africa’s inclusion in the powerful bloc, as it features last on the list in a number of categories such as size of labour force, GDP, foreign exchange reserves, and even land area.

Others have argued that in terms of Africa’s vast natural wealth, the move is a strategic one and will give the other nations easier access to the continent’s oil and mineral reserves.

Most agree that BRICS membership will open up many more opportunities for the country.

According to Nkoane-Mashabane, South Africa represents not only its own people, but a larger African market of a billion people.

“South Africa goes into BRICS remembering fully that we are an integral part of this continent of Africa,” she said at a media briefing before the delegation’s departure.

Currently the five countries contribute 20% to the global GDP, and account for 40% of the world’s population. All of them are members of the UN Security Council.

At a cocktail function before the first day’s events, President Jacob Zuma encouraged South African businesses to aggressively take on new opportunities in the fellow BRICS nations of Brazil, China, Russia and India.

Speaking to the approximately 100-strong South African delegation, Zuma also asked the private sector to report back on any obstacles they might come up against, so that the government could help them to do business with other BRICS nations.

“We need to be armed with such facts, with the experience of businesses – what has been your experience as businesses,” said Zuma, adding that South Africa’s BRICS membership indicates that Africa is part of the changing world.