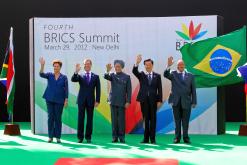 
Brand South Africa hosted a media breakfast in Johannesburg’s northern suburb of Sandton for a group of visiting journalists from South Africa’s fellow Brics countries, where experts spoke on the country’s investment prospects and competitive advantages.

The journalists hail from China, Brazil, India and Russia, and are visiting as guests of Brand South Africa. While in the country they’ll meet with representatives from business and the government, including the departments of trade and industry and environmental affairs.

From Johannesburg the group heads to KwaZulu-Natal, where they’ll visit the Dube Tradeport, one of the big drivers of economic growth in the province, and the Transnet Port Terminal, the largest container terminal on the continent. They’ll also pop into the multi-million-rand Moses Mabhida stadium, built for the 2010 Fifa World Cup, and visit the offices of Trade and Investment KZN.

On the leisure side, the journalists will have lots of opportunity to taste South Africa’s splendid cuisine, and they’ll spend a night at the ever-popular Hluhluwe Game Reserve in northern KwaZulu-Natal, the heart of the Zulu Kingdom.

Hluhluwe is well-known as one of the pioneers of rhino conservation in South Africa, since the start of its Operation Rhino programme in the 1950s and 60s.

“Johannesburg is the cosmopolitan centre, the New York or London of Africa,” said Marina Mayer, executive director of the city’s economic development department, speaking at the breakfast.

She was following on from Brand South Africa CEO Miller Matola, who had opened the morning’s proceedings with some insight into developments such as the African common market initiative which is slowly but surely gathering ground but has yet to become fully operational.

Matola said that if this free trade area opens up enough by around 2014, it will bring 600-million people into one market and present tremendous opportunities for business and investment.

Many of those opportunities are already available in Johannesburg, said Mayer. She mentioned the city’s Buy Sell Invest and Visit initiative, a flagship programme that aims to bring together people from the Brics and Southern African Development Community blocs to partner with private and public organisations.

This programme is part of the city’s 2040 strategy, which outlines the growth of Johannesburg over the next three decades into a sustainable, prosperous and resilient place to live and work. It aims to not only attract new investment into the city, but support existing businesses and help them to expand.

“In the past we tended to focus on stimulating the economic development of smaller enterprises,” said Mayer, “but we’re now starting to target mainstream companies.”

She moved on to an ambitious plan to construct concrete decks over certain railway lines in Johannesburg. This technique, known as decking, is a tried and tested way of addressing limitations in room for growth, and will offer new space for residents and businesses in the city.

“We’re looking for a private partner to help us with decking our railways,” said Mayer.

Other big opportunities for investors include the urban development zone in the inner city, which offers a substantial tax rebate that’s already been negotiated with the South African Revenue Service, and the proposed aerotropolis around the privately owned Lanseria International Airport, west of Johannesburg.

This is becoming an increasingly popular choice for travellers who wish to avoid the often long and busy trip to OR Tambo International on Johannesburg’s far east side. Unlike OR Tambo, which sits between busy industrial areas and residential suburbs, Lanseria is still surrounded by wide open spaces and is ripe for development.

Mayer named other initiatives such as the Jozi Skills Hub, which will train people in needed skills and get them ready to be employed, and the Jozi Rising project, which will provide support and incentives for entrepreneurs.

After Mayer it was the turn of Cynthia Chikura from Business Unity South Africa, who spoke of South Africa’s competitive advantages – its wealth of natural resources, its relatively open economy and easy regulatory environment, and its progressive foreign policy.

“We rely on trade and investment to increase productivity and grow the economy,” she said, “and South Africa is still an attractive investment destination.”

“Other nations and trade blocs, such as the US and EU, are looking to Africa, and South Africa is a focal point in many investors’ strategies,” said Chikura. “We have the biggest ports in Africa and we offer access to land-locked countries.”

“Indonesia and Vietnam, as well as Turkey, Mexico, Colombia, and Nigeria are all candidates for admission to Brics in the future,” he said, adding that the bloc would then have to be renamed to E11, or something similar.

He said that growth in Africa has tracked Chinese investment since around 2009, meaning that there is a visible correlation between investment and growth on the continent.

“But nobody foresaw the demand for natural resources that would come from China,” he said, “and therefore nobody planned the infrastructure that would be needed. What most African states need most now is industrialisation.”

The continent has another chance to plan ahead, and that’s because the World Bank has estimated that 80-million jobs in low-end manufacturing would be lost in China in coming years, said Davies.

“We need those jobs in Africa, so let’s start preparing – job loss in China should be job gain in Africa.”

In this, the continent faces opposition from other fast-developing regions such as Southeast Asia, he said – but positives such as South Africa’s world number one position in terms of its auditing standards and its stock exchange regulation are hard to top.