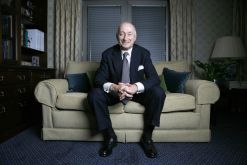 Graham Mackay is remembered as one of the most inspirational and successful leaders in international business by people he worked alongside at SAB Miller.
(Image: SAB Miller) 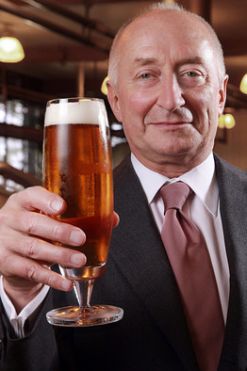 Meyer Kahn said of Mackay, “He had the courage to join what we called the dance of the elephants.”
(Image: Wall Street Journal)

It rarely happens that the government takes note of and comments on the death of a businessman in the private sector. But Graham Mackay, a man lauded by South African Finance Minister Pravin Gordhan as a phenomenal leader, was not simply another businessman. The SAB Millerchief executive officer (CEO) was, according to Gordhan, a man who, “never forgot his South African roots and remained proudly South African in international fora”.

Described as forward-thinking and cerebral the soft-spoken Mackay, who succumbed to cancer on December 18, oversaw a 1 000% rise in the value of SAB stock since 1999 when he became CEO. Under Mackay’s leadership South African Breweries grew from the market leader in a pariah state into the world’s second-largest brewer. Today, the company sells 200 brands of beer and employs 70 000 people in 75 countries. With Mackay at the helm, every R1 700 you invested when he became CEO, would now be worth almost R10 000.

When the University of the Witwatersrand Bachelor of Science graduate joined SAB in 1978 it controlled the South African beer market and accounted for 10% of all consumer expenditure. Income was not derived solely from brewing though; as economic sanctions against the apartheid government shrank the economy SAB had expanded into supermarkets, clothing, furniture and hotels to drive growth.

When Mackay took over from former CEO Meyer Kahn in 1990 he starting selling off operations that were not core to the brewery business. The OK Bazaar chain was sold to Shoprite/Checkers’s Whitey Basson for R1. Mackay believed strongly that beer was a growth industry, as he told an investor conference in February this year, paraphrasing rock icon Frank Zappa, “You can’t be a real country without a beer or an airline.”

SAB Miller’s international expansion was made possible by changes in South Africa’s political landscape. Like other large South African companies SAB was eager to be seen as not supporting the government’s apartheid policies. The company’s practice of training and promoting black employees and encouraging black entrepreneurship won it support from Nelson Mandela even before his release from prison in 1990.

As Mackay told a journalist, “We positioned ourselves as a very progressive company and enlightened company, and pushed the boundaries all the time in what we were allowed to do.”

Expansion opportunities for SAB in Europe and North America were limited. In North America Anheuser Busch’s dominance made it a difficult market to crack, and European brewers were unimpressed by SAB’s courting due to the soft Rand.

Mackay identified Africa and the former Communist Eastern Europe as the areas to look for opportunity. He tapped into the experience of his South African management team to turn around breweries that had been nationalised, run badly or neglected and which produced poor-quality beers.

Through his years at the helm of what became SAB Miller, Mackay depended on the experience of these South Africans to build a brewing conglomerate that is the now the largest beer producer in China and South America. “Those early experiences helped us to develop skills to turn around failing enterprises in other markets. We learnt how to analyse companies quickly and deploy a cadre of managers to knock them into shape.”

Mackay employed a core group of managers whom he trusted with day-to-day decisions. Executives often refer to the company as a family where each member trusted that each one was working for the benefit of SAB Miller.

SAB chairman, Norman Adami, was at Mackay’s side in those years and remembers that the belief that a company from the tip of Africa could take on giants came from Mackay. He never doubted that South Africans had the ability to take on the world.

“He told us once that we did not need to have an inferiority complex about being South Africans … ‘I’m telling you that we can conquer the world,'” Adami remembered recently.

In the words of Minister Gordhan, “The corporation that he worked for counts as one of the best producers of high-calibre managers and is among those firms that have been a good training ground for black professionals.”

Within a decade the former tank commander had grown SAB from the giant of the South African beer market to a player on the international stage. By 1999, 55% of the company’s revenues were derived from its offshore operations. In 2002 Mackay took his boldest step when he added the US-based Miller Brewing Company to the SAB stable for $6.5-billion.

In April Mackay underwent surgery for a brain tumour before recovering to resume his post as chairman in September. His conditioned worsened and by November he stepped down permanently. He passed away at his home in Hampshire, England, surrounded by his wife and family.

Acknowledged as the 20th best CEO in the world by Harvard Business Review, Mackay’s business acumen placed SAB Miller on a transition path that allayed any jitters in the markets. Clark believes that Mackay’s legacy is that he leaves SAB Miller stronger than when he joined it.