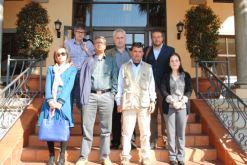 A group of journalists from other Brics countries are learning more about South Africa’s investment prospects and competitive advantages.
(Image: Ray Maota)

South Africa is ready to establish itself as a competitive market for investment within the Brics network, while embarking on efforts to make its economy greener and harnessing a successful energy sector.

These goals were revealed to a group of visiting journalists from the country’s Brics compatriots, namely Brazil, Russia, India and China by speakers from the departments of trade and industry (DTI) and environmental affairs, as well as business leaders, on 14 August in Pretoria.

“The continent’s full potential will remain unfulfilled unless we address the challenges of inadequate infrastructure, the limitations imposed by small and fragmented markets, and inadequate diversification of industrial output, all of which are responsible for the low levels of intra-African trade.”

According to its authors, who are key policy directors within the DTI, the 2012 Industrial Policy Action Plan shows how successful an industry policy can be if its design, resources and communication standards are kept in mind. It is the flagship project of the department for the next two years, defining its direction to attract foreign investments.

He added that tariff-setting standards have improved in favour of better trading operations between South Africa and its trade partners, and campaigns against customs fraud and illegal imports are being scaled up.

Not only is South Africa actively involved in the integration of the Southern African Development Community, but that is also the case in the East African Community, which includes countries like Kenya, Tanzania and Burundi. The Common Market for Eastern and Southern Africa is another platform where the country participates.

He further mentioned that South Africa’s involvement in the Brics alliance is a key element to the country’s global economic strategy, saying this can best be illustrated by explaining the three pillars on which its engagement strategy is based.

These are the member countries’ policies on giving developing countries a greater voice in the global business landscape, strengthening intra-Brics cooperation, and South Africa’s intent to extend Brics’ cooperation in support of Africa’s development agenda.

Godfrey Nyakhulalini, deputy director for national greening at the Department of Environmental Affairs, spoke on the country’s aims with regard to establishing a green economy.

“Our aim towards a green economy cannot be achieved by government alone so the private sector and civil society must play a fundamental role,” he said.

Nyakhulalini said the National Treasury has allocated R800-million (US$97-million) over the next two years to South Africa’s Green Fund, which aims to provide finance for high-quality, high-impact, job-creating green economy projects around the country.

“South Africa aims to promote itself as a gateway to Africa, and so its taxation system follows a global best practice,” she said. “It also has a corporate tax rate of 28% which is slightly lower than other African countries.”

She added that the country has, over the past couple of years, passed legislation that is protective of consumers and employees.

“The Companies Act provides for more self-regulation and codifies South Africa’s constitution to make it easier to do business here,” said Holland.