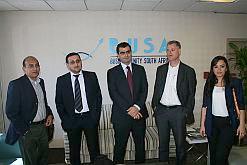 Mahmood Saberi of Gulf News; Bahaa
Al awam, a Syrian journalist; Roger
Romanos, the senior editor at Al-Iktissad
Wal-Aamal Group; Peter Smith of Dubai
Gulf Business; and Hala Saqqa, a senior
account executive at Hill and Knowlton
Strategies in Dubai, are in South Africa
to learn more about the country’s economy
and business environment, as guests of
Brand South Africa. 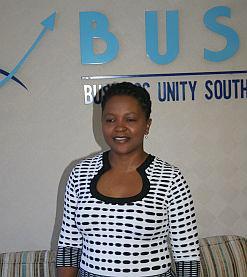 The CEO of Business Unity South Africa,
Nomaxabiso Majokweni, said that
being in business in South Africa is easy,
starting with the registering of your
business, which takes nearly a month
depending on the complexity of your
business.
(Images: Ray Maota)

Journalists from the Middle East have been introduced to the constructive role South African businesses play in reaching the country’s economic growth, development and transformation goals.

They have also learned how the National Treasury is responsible for managing South Africa’s government finances.

Their visit to Business Unity South Africa (Busa) and the National Treasury were part of Brand South Africa’s aim to expose the international press to South Africa’s business environment, as well as its regulatory and policy systems.

Mahmood Saberi of Gulf News, a Dubai publication, said: “I’m here to basically see how trade relations and investments can be improved between the United Arab Emirates and South Africa.”

Uncertainty of growth in the world

The wellbeing of Europe’s economic system and the US economy are just some factors that will determine whether South Africa reaches its projected 3.3% budget deficit by 2014.

Lungisa Fuzile, the director-general of the National Treasury, said: “Domestically, we need to invest in things that are growth-intensive such as infrastructure, which will make business transactions easier. These, for example, are ports and roads.

“Regulatory regimes in different sectors also need to be revised so there is no barrier to entry for people to do business.”

Externally there had to be a South African presence in markets with higher growth potential, and seven of these markets were in Africa.

South Africa’s financial system showed great resilience during the 2009 world economic crunch. Fuzile said: “In South Africa, we have a four-pillar model, meaning we have four big banks and other smaller ones.

“The fact that we survived the recession in 2009 is largely due to the fact that these banks’ dependence on foreign funding is limited.”

Another factor that led to South Africa withstanding the recession was the National Credit Act, which made seeking credit harder. “Although there was talk that this Act was too restrictive, recent readings in terms of credit extension ratings show that they are rising, so this Act is not too restrictive,” said Fuzile.

The Wal-Mart–Massmart merger was recently approved by the Competition Tribunal.

The deal concludes the R16.5-billion (US$22-million) cash offer by Wal-Mart to acquire 51% of Massmart at R148 ($18) per Massmart share – a smaller stake than the initial 100% offer made in September 2011, but one that would see Massmart retain its listing on the Johannesburg stock exchange, the JSE.

Fuzile said: “The message that was being sent by the conclusion of this deal by the tribunal is that of free trade because we do not want to restrict entry to our markets for others hence we also feel the brunt later.”

The Tribunal said: “Wal-Mart does not compete with Massmart in South Africa and its only presence in the country is a small procurement arm that sources local products for its stores globally.

“The merging parties contend that the merger will indeed be good for competition by bringing lower prices and additional choice to South African consumers. We accept that this is a likely outcome of the merger based on Wal-Mart’s history in bringing about lower prices.”

The voice of business in SA

Busa acts as the representative of South African business views on the continent and internationally. It interacts with the government in terms of policy and what will make being in business easier in South Africa.

Nomaxabiso Majokweni, Busa’s chief executive officer, said: “Being in business in South Africa is easy, starting with the registering of your business, which takes nearly a month depending on the complexity of your business.”

The 2011-2012 World Economic Forum Global Competitiveness Report indicates that South Africa is at position 50 and has the most competitive economy in sub-Saharan Africa.

Majokweni said: “Africa is still a huge market for South Africa but we need South African businesses to invest in Africa instead of just importing and exporting.”