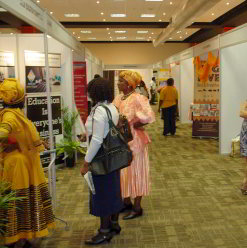 Border-Kei Chamber of Business members,
ranging from agriculturalists to automotive
parts manufacturers, were given the
opportunity to showcase their products at
the Business Connect conference.
(Image: Shamin Chibba) 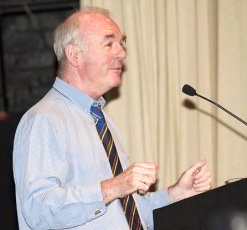 South African business guru Clem Sunter
said that entrepreneurs are the way of the
future for the South African economy.
(Image: Flickr)

If the number of small businesses in South Africa increases, the country’s economy will be saved in the future. This is according to business pundit Clem Sunter, speaking to more than 100 entrepreneurs at the Eastern Cape’s Business Connect conference in November.

The Border-Kei Chamber of Business (BKCOB) hosted the conference which was held at the East London International Convention Centre between 16 and 18 November.

Established 135 years ago, the BKCOB aims to promote business within the Border-Kei region. It currently supports 125 member companies that range from agriculturalists to automotive parts manufacturers.

Its vision is to lobby for its members; represent them and provide them with opportunities; and provide general services such as hosting networking conferences, golf days and awards ceremonies.

The conference is in its sixth year and caters for business-to-business and business-to-government undertakings.

Sunter took a macro view of the national economy and spoke about the effects of scenario planning, a strategy that uses game theory and allows companies to make flexible long-term plans.

He compared the global economy to a football league and said that South Africa still belongs in the premier division, amongst the world’s leading economies.

However, the country has a 40% chance of staying in the same league and if it does not improve or maintain its standard, it may soon be relegated and join the rest of the African continent.

There are three challenges that Sunter said could send South Africa to the lower tier – South Africans have to make sure there is consistent leadership; that nationalisation of companies does not take place; and that land grabbing is prohibited.

He went on to say that a culture of entrepreneurship needs to be fostered in South Africa and that the increase in the number of entrepreneurs and small businesses will help keep the country in the premier division.

Sunter echoed a statement made by businessman Martin Feinstein at the Cape Town Entrepreneurship Week earlier in November – that the government should not focus exclusively on creating 5-million jobs but should instead change their strategy to help start up one-million businesses, which would in turn create jobs.

Media to play a role in business

On the second day of the conference, chief editor of regional newspaper Daily Dispatch, Brendan Boyle, addressed the role the media would play in business in the future.

He said that businesses and media should collaborate to promote the Border-Kei region.

According to BKCOB executive director Les Holbrook, his organisation wanted to pass on the message to Boyle that business needs to be acknowledged more by the media.

“When we spoke to members [of BKCOB] many of them think that the Daily Dispatch does not care about us,” said Holbrook.

Holbrook stated that the relationship between business and the media has to improve in order for business to gain more exposure and reach out to communities.

Boyle also touched on the impact the internet has had on both business and media. He believed that the web is taking precedence over print and that by 2030, print would become obsolete.

Holbrook said that BKCOB’s primary focus for 2012 is the role business plays in environmental issues such as climate change, global warming and energy production.

A BKCOB sub-committee, the Energy Forum, is looking to collaborate with the public sector in creating eco-sustainable business practices.

The Energy Forum was established as a lobbying group that addresses the generation, conversion and use of energy from traditional sources such as coal, nuclear and gas, and alternative sources such as bio-fuels and solar power in the region.

The forum has drawn up an environmental charter that emphasises the need to cut down on waste, boost electricity saving by switching off lights and curb carbon emissions by taking fewer flights.

Holbrook said that technology will also be a key focus for BKCOB in 2012.