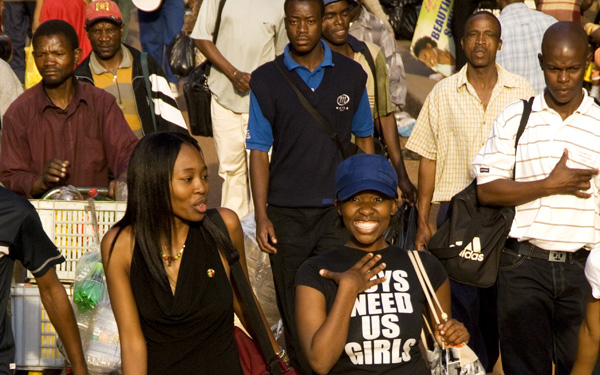 Black economic empowerment is designed to ensure South Africa’s economy “builds on the full potential of all persons and communities across the length and breadth of this country”, according to the strategy document. (Image: Chris Kirchhoff, Media Club South Africa. For more free photos, visit the image library.)

South Africa’s policy of black economic empowerment (BEE) is not simply a moral initiative to redress the wrongs of the past. It is a pragmatic growth strategy that aims to realise the country’s full economic potential.

In the decades before South Africa achieved democracy in 1994, the apartheid government systematically excluded African, Indian and coloured people – collectively known as “black people” – from meaningful participation in the country’s economy.

This inevitably caused much poverty and suffering – and a profoundly sick economy.

The distortions in the economy eventually led to a crisis, started in the 1970s, when gross domestic product growth fell to zero, and then hovered at about 3.4% in the 1980s. At a time when other developing economies with similar resources were growing, South Africa was stagnating.

In 2003 the government’s BEE strategy was laid out in a document titled South Africa’s Economic Transformation: A Strategy for Broad-Based Black Economic Empowerment.

“Our country requires an economy that can meet the needs of all our economic citizens – our people and their enterprises – in a sustainable manner,” the strategy reads.

“This will only be possible if our economy builds on the full potential of all persons and communities across the length and breadth of this country.”

Despite the many economic gains made in the country’s 13 years of democracy – growth hit 5% in 2006 – the racial divide between rich and poor remains. The DTI points out that such inequalities can have a profound effect on political stability:

“Societies characterised by entrenched gender inequality or racially or ethnically defined wealth disparities are not likely to be socially and politically stable, particularly as economic growth can easily exacerbate these inequalities.”

Black economic empowerment is not affirmative action, although employment equity forms part of it. Nor does it aim to merely take wealth from white people and give it to blacks. It is simply a growth strategy, targeting the South African economy’s weakest point: inequality.

“No economy can grow by excluding any part of its people, and an economy that is not growing cannot integrate all of its citizens in a meaningful way,” the DTI says.

“As such, this strategy stresses a BEE process that is associated with growth, development and enterprise development, and not merely the redistribution of existing wealth.”

There is a danger, recognised by the government, that BEE will simply replace the old elite with a new black one, leaving fundamental inequalities intact. For this reason the strategy is broad-based.

“Discrimination is at its most severe when race coincides with gender and/or disability.”

How to achieve BEE

Black economic empowerment is driven by legislation and regulation. An integral part of the BEE Act of 2004 is the balanced scorecard, which measures companies’ empowerment progress in four areas:

This scorecard is defined and elaborated in the BEE Codes of Good Practice, which were passed into law in February 2007.

The codes are binding on all state bodies and public companies, and the government will be required to apply them when making economic decisions on:

Private companies must apply the codes if they want to do business with any government enterprise or organ of state – that is, to tender for business, apply for licences and concessions, enter into public-private partnerships, or buy state-owned assets.

Companies are also encouraged to apply the codes in their interactions with one another, since preferential procurement will affect most private companies throughout the supply chain.

Different industries have also been encouraged to draw up their own charters on BEE, so that all sectors can adopt a uniform approach to empowerment and how it is measured.

International investors are increasingly embracing BEE, in sharp contrast to the 1990s, when the first round of empowerment deals battled to find foreign support.

Fortune 500 company Old Mutual’s R7.2-billion BEE deal, launched in 2005, will not only give half a million South Africans an interest in the company – it also sparked a rise in Old Mutual share prices.

US investment bank Merrill Lynch announced in February 2006 that it will sell up to 15% of its South African business to black staff, women investors and a local educational trust, describing the move as part of its long-term commitment to the country and black economic empowerment.