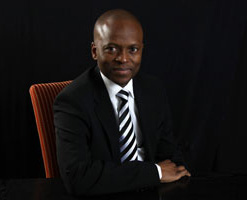 Sandile Zungu was thrilled that a space had been created where entrepreneurs could share perspectives on how to get the best out of people.
(Image: Ziko)

“Barrier breakers do extra ordinary things; they are free thinkers; they have an insatiable thirst for knowledge. They persevere, and they innovate for the collective good,” says extraordinary South African Sandile Zungu.

Zungu was speaking at an Extraordinary South Africans event in Johannesburg on 3 December, a prestigious talk to the movers and shakers of the country’s corporate world. His words were greeted with supportive nods as he spoke of his passion for South Africa and his forging forward in the business world, carving a niche for himself as a barrier breaker.

Founder and chairman of investment company Zungu Investments Company Limited, or Zico, Zungu stunned the South African business world when his company grew from a zero asset base to more than R400 million, in net asset value. The Extraordinary South Africans Series showcases outstanding South Africans who represent all that is extraordinary about being a South African on the national and global stage. Individuals who speak on this platform display unparalleled ability to inspire and affect others.

Zungu was thrilled that a space had been created where entrepreneurs could share perspectives on how to get the best out of our people. It was an opportunity to chew on what it took to make a positive change in the country. “If we are to survive this volatile world, we must be prepared to become barrier breakers. We live in a world of poverty amidst plenty. We live in a world of global icons, with no definition – gurus of their own marketing. Barrier breakers do not work for the individual, they work for the collective good. They are not limited to politics, but focus on all spheres,” said Zungu.

He used the example of Malala Yousafzai, the Pakistani teen who was shot in the head and neck in an assassination attempt by Taliban gunmen while returning home on a school bus. She wanted an education but this was denied her by the religious fundamentalists taking hold of power in her region. Malala is known for her activism for the right to education for females, and for rights for women, especially in the Swat Valley, where the Taliban had tried to ban girls from attending school.

Zungu explained that she dared to break barriers that denied her empowerment. Once these barriers were broken, she was able to achieve recognition and understanding of her plight. “Malala is a classic barrier breaker,” he said.

Extraordinary South Africans are individuals with proven demonstrable leadership qualities who continue to shape the course and direction of history. They live a life committed to a greater good for all, and are examples to which others aspire. They are individuals who have had a significant impact in their chosen fields, be it in government, business, science, academia or society.

Zungu attended the prestigious Hilton College, in KwaZulu-Natal before graduating from the University of Cape Town (UCT) in 1988 with a Bachelor’s degree in mechanical engineering. A brief career as an engineer followed, with various positions at Richards Bay Minerals, Engen Refinery, National Sorghum Breweries and SA Breweries between 1989 and 1994. But he changed direction in 1995, when he attained an MBA in marketing and finance from UCT.

His move into business brought considerable success and he founded Sarhwu Investment Holdings Limited, now Zico, in 1997. Between May 2001 and June 2005, he was the chairman of Denel, the youngest-ever head of a parastatal in South Africa. He remains a prominent business figure, chairing the boards of companies such as Aflease Gold and Spectrum Shipping. Zungu believes that South Africans are the designers of tomorrow, and have the ability to be barrier breakers.

According to his peers and associates, he inspires others and is a disrupter and a transformer in the market. Barrier breakers traverse new landscapes, he maintains. They take on grand challenges and make them look ordinary. Barrier breakers lead by serving. “We must learn from the global icon Madiba, who said, ‘I am here to serve, not to lead.’ We must do for others and not for ourselves,” he said.

“Barrier breakers have a profound effect as they build for others.” Zungu commented that we needed to ask: “How do we infuse communities and organisations to empower others?” He pointed out: “We need to question geo-political issues and question popular views and their platforms. For barrier breakers to be effective, their values are important.”

Our values were our enablers, and we must be on a noble quest to become barrier breakers. “We, in South Africa, must be prepared to unlearn. Learn with fresh eyes and an open mind. Formulate an opinion and do not be swayed by authority.”

A global traveller, he asserted that barrier breakers were reflective souls that developed critical skills. They had commendable attributes of self-awareness, self-management, self-motivation, empathy and social skills. “They must have a sound moral compass and consistency of character. They need to take responsibility for their conduct, their own narrative. Seize the now and taste the future.”

He also urged South Africa entrepreneurs to ride the wave of change and inspire others to act. “Change is everywhere, we are a privileged generation. South Africa has a huge responsibility to build something better for prosperity… We are the born-free generation. We need to have a philosophical framework in South Africa to work together to harness each other’s strengths. We must have an attitude of ubuntu and collectivism – each one teach one.”

Proudly he stated that he had built his own establishment, created his own wealth and was happy with the path he had travelled and the influence he had had. “I am still not satisfied and will continue to challenge myself. I am so excited about the future, and I will continue to dream. I have a very powerful attitude – I will fight and I will win.”

The Extraordinary South Africa project is a project of Litha Communications, a communications, conference and events management, and consulting business. Over the next 12 months, the line-up of top speaker will include: Thabo Mbeki, the statesman; Lewis Pugh, the environmentalist and cold water swimmer; Archbishop Emeritus Desmond Tutu; Tim Noakes, the sports scientist; Nkosazana Dlamini-Zuma, the chair of the African Union; Patrice Motsepe, the mining magnate; and Jonathan Jansen, the rector and vice-chancellor of the University of the Free State.

According to Litha Communications, the audiences attending the Extraordinary South Africans series consist of the “top third of South African society, established and young people who are seeking meaning and inspiration from those who have taken the road less travelled. They are individuals who want to redesign ‘what’ and ‘how’ we think about ourselves and all who share this country with us. They are obsessed with creating win-win scenarios. They are decision makers.”