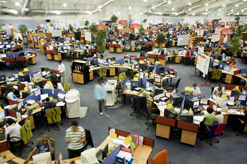 With South Africa largely sheltered from the subprime crisis and resultant economic meltdown, the country’s banks now have a larger market capitalisation than the world’s major corporate banks.

Absa Bank now has an equivalent market cap to its major shareholder, the once-giant Barclays UK, and Standard Bank is larger.

South Africa’s stringent credit regulations are largely recognised as having prevented local banks being caught in the web of the subprime lending craze that entangled financial institutions across the world.

“They have been pounded like you can’t believe,” said Wayne McCurrie of RMB Asset Management on Summit TV. “Our banks are nothing like the overseas banks.

“So our banks are now bigger in market cap terms than the major corporate banks.”

In 2005 Barclays paid some R33-billion for a majority stake in Absa. The British bank’s share price has tumbled headlong recently.

McCurrie said on Tuesday that the world’s major corporate banks had fallen us much as 30% to 40% in two days. “And that comes after an 80% fall – so they are now a fraction of what they used to be.

“We are lucky in South Africa – not only are our banks insulated, the majority of our economy is insulated.

“The resource sector is not – we’ve seen resource prices falling with platinum falling from US$2 200 an ounce to around $800 or $900 now. It’s been a dramatic effect. Unfortunately this adds to the general economic downturn we see in South Africa.

“But it’s important to see that South Africa is in a downturn – it’s not a crisis, it’s not a collapse.”

On Wednesday Absa assured investors that it was “unaffected” by Barclays UK’s troubled position.

“Absa is a separately listed company on the JSE and is a South African registered bank regulated by the South African Reserve Bank,” Patrick Wadula, Absa’s head of media relations, told Sapa.

The sell-off of banking shares in London continued on Wednesday, with Barclays’s shares falling to a 24-year-low, with rumours that the British government would nationalise the bank.