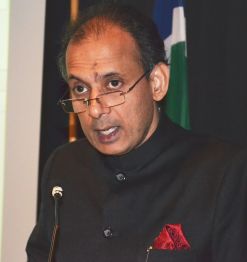 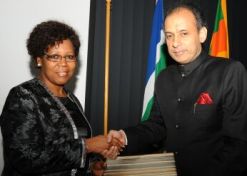 With its economic growth soaring and tourist numbers swelling by the year, there is no reason why South African businesses should not invest in Sri Lanka. And come November, potential investors will get a chance to see exactly what the island nation has to offer when the Commonwealth Business Forum is held in Colombo.

Speaking at the introduction of the forum in Johannesburg’s Metropolitan Centre on Wednesday, 29 May, Sri Lankan High Commissioner to South Africa, Shehan Ratnavale, personally invited potential investors to the event and to do business with his country.

The forum will take place alongside the Commonwealth Heads of Government Meeting, which is being held in Asia for the first time in 22 years. It would be, Ratnavale said, a great opportunity for South African investors to network with high level business representatives from 54 Commonwealth nations. “The Commonwealth is made up of developed and developing countries, and diverse cultures and traditions. This creates fertile ground for exchange of technological know-how, skills and investments that will foster sustainable economic partnerships.”

Ratnavale urged South African hospitality companies to take advantage of the island nation’s recent influx of tourists. During its civil war, which ended in 2009, visitor numbers languished around 400 000, but in 2012 more than a million tourists headed to Sri Lanka. By the end of 2016, the country expects that number to increase to 2.5 million. “One of the major problems is the shortfall of hotel rooms, so we are inviting hotel investors.”

Already, there are a few South African companies looking to cash in on Sri Lanka’s growth. Later this year, a delegation of small-to-medium enterprises from South Africa’s handicraft industry – supported by the Department of Trade and Industry – will visit the country. Soon thereafter, the South African Property Owners Association will visit to explore opportunities for investment. “I emphasise the time is right to take South African and Sri Lankan commercial relations to a different level. And the business forum provides a wonderful opportunity to do so,” said Ratnavale.

Bringing the forum to Johannesburg

Johannesburg’s portfolio head of economic development, Willie van der Schyf, is looking to bring the business forum to the city in the near future. When he first met Ratnavale two months ago, the high commissioner happened to mention the forum was starting an African chapter – and Van der Schyf saw an opportunity for Johannesburg to host it.

Van der Schyf was responsible for initiating ties with the Sri Lankan High Commission. The partnership is part of the City’s outreach programme, which builds relationships between local businesspeople and embassies in Johannesburg. The Brics nations are also part of the programme. “We will be hosting, in July, what we call a Buy, Sell and Invest Initiative, whereby we will be attracting foreign investment into Johannesburg. And Sri Lanka will definitely be a part of that.”

City of Johannesburg council Speaker, Conny Bapela, urged local businesspeople to take up Ratnavale’s offer to invest in the island. “We would be highly privileged to count Sri Lanka as one of our major partners and look forward to cementing our relations and taking them to an advanced level.”

Mid-point between Africa and Asia

Sri Lanka is positioning itself as an important mid-point between Africa and Asia. In August last year, Seychelles president James Michel visited Sri Lanka to discuss trade, maritime links and safeguarding their interests from pirates that sailed the Indian Ocean.

In the same month, King Mswati III of Swaziland also made his way to the island. His visit led to the Sri Lankan mini tractor manufacturer, Edna Engineering, opening a factory in Swaziland’s capital of Mbabane. Sri Lanka is also looking to establish 15 diplomatic missions in Africa and the president, Mahinda Rajapaksa, recently opened a new high commission in Uganda.

Last month’s HSBC Global Research report, Bridging the Gap, stated that Sri Lanka was one of three economies – including China and Malaysia – that was taking off. This was because of the public sector’s stronger role in driving infrastructure.

The Colombo forum comes at a time when developed economies are struggling to recover from recession and maintain open markets, and when emerging countries are enjoying greater prominence globally. In light of this, the three-day event will cover topics to do with building new partnerships for trade, wealth creation and social development; developing small- and medium-sized businesses; and increasing tourism without threatening local economies and the ecosystem.

Centred on the theme of “Partnership for Wealth Creation and Social Development”, Ratnavale said the forum would look at private entrepreneurship, global linkages and strong institutional support as solutions to these challenges.