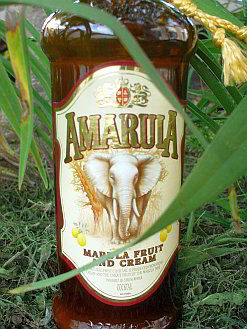 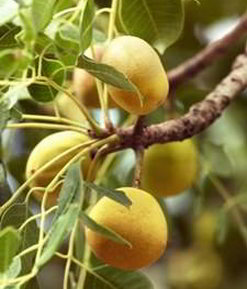 The golden fruit of the marula tree is
processed to become the best-selling
“Spirit of Africa”.
(Image: Amarula)

The year 2010 was a good one for South Africa. Apart from the obvious success of the World Cup, South African liqueur giant Distell managed to further enhance the country’s international reputation.

The company’s flagship brand Amarula, a tasty blend of cream and extract of marula (Sclerocarya birrea, known locally as the elephant or marriage tree), has recently been ranked sixth in a Top 10 Hot Liqueur poll conducted by respected global publication Drinks International.

This is the first time that the product has featured on this list.

Seven hundred bartenders, bar owners and mixologists across 60 countries were asked to identify the brands that their patrons demanded the most.

Distell’s senior global spokesperson Siobhan Thompson said the boost in popularity is mainly due to Amarula’s versatility. “We are really excited that there is such a growing recognition of its ability to play in the on-trade arena with appreciation for its nuanced and multi-layered flavours of coffee, vanilla, chocolate, toasted nuts and citrus,” she said.

Amarula’s success also stems from its marketing campaign during the 2010 World Cup.

Since the brand was an official licensed product at the tournament, the sought-after gold trophy replaced the elephant traditionally used as a logo on its packaging, and the campaign showcased the versatility of the product.

Another move that contributed to this rise took place in the first half of 2010, when Distell appointed Cellar Trends to handle their UK distribution of Amarula. Cellar Trends distributes other heavyweight brands such as Jagermeister, Cinzano, Campari and Skyy Vodka.

At the time, Distell Europe’s MD Gary Greenfield clearly stated that the company was looking to raise the profile of the drink. “We were looking for a successful distributor with an existing portfolio of strong brands that would complement Amarula,” he said.

In August, research conducted by business intelligence provider Euromonitor International labelled the cream liqueur as one of the fastest growing spirits in the world, appearing seventh on a list out of 100.

Thompson said “The Spirit of Africa”, as it is known, is showing consistently good growth in the 103 countries that it is sold.

“This holds true even in major markets where the brand is already well-entrenched.  Some of the most spectacular volume increases have come from Latin America, historically a strong supporter of Amarula, and Europe, most notably Germany, which remains the single biggest off-shore market for the brand,” she said.

She added that Asia-Pacific, North America and Africa have also shown impressive increases.

According to the website Wine Times, Amarula is the second biggest cream drink of its kind universally, remarking that “Its inimitable taste that comes from the marula fruit, indigenous to southern Africa, blended with cream, has proved irresistible to consumers worldwide, along with its exotic connection to Africa, underscored by the brand’s support for African elephant research.”

The Amarula Trust is responsible for the conservation and community projects that help to protect elephants and provide people with a better quality of life.