Alpacas are protective of their herd and
will attack any animal that trespasses. 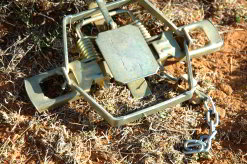 The gin trap’s tread plate mechanism
means agony and almost certain death
for the animal that steps on it.
(Images: Bool Smuts)

Recent studies by South African environmental NGO Landmark Foundation suggest that non-lethal predator management options are more effective for protecting livestock than predator extermination, which is destructive to the environment.

The research showed that non-lethal control methods, including guardian animals, have resulted in a 67% to 93% productivity increase on local sheep farms. Landmark’s most recent studies will look into the effectiveness of guardian alpacas.

For the past 350 years, farmers and predators have waged war. Ruthless extermination methods include gin traps, which clamp down on an animal’s paw, leaving it to die in agony. Gin traps kill indiscriminately and sometimes trap the elusive leopard, found in ever-declining numbers around South Africa.

Every year thousands of smaller predators such as jackal and caracal are shot on farms.

Despite these extreme and inhumane measures, farmers continue to suffer huge losses.

As many as 29-million small livestock, such as sheep, are killed every year in South Africa, according to desktop studies by the National Wool Grower’s Association of South Africa. The combined value of these livestock is over R1-billion (US$7-billion).

Small predators like jackal have become increasingly prolific in the last century. In the past, scientists speculate, their numbers would have been controlled by larger predators like lion, but as much of their territory was taken over for farming, jackals have thrived with no major competition and an abundance of easy prey.

But attitudes amongst farmers are slowly starting to change, said Bool Smuts, director of the Landmark Foundation.

“There definitely seems to be a swing to a different understanding in support of ethical and non-lethal controls,” he said.

“It is self-evident that existing lethal practices do not work. Some farmers are still finding it difficult to let go of those practices. I think there is a cultural component it to it.”

Smuts added that emerging repeated data from different entities has shown that ethically and ecologically sensitive methods make economic sense for farmers, because livestock production increases as a result.

Landmark’s research began in 2008 with a probe into a number ethical and ecological livestock protection options. These included dead-stop collars which protect an animal’s neck, and various guardian animals such donkeys and Anatolian sheep dogs. The dogs, especially, have produced remarkable, cost effective results. Landmark is also considering the establishment of a human shepherding program.

The company is about to begin the second phase of its research, into the seemingly benign alpaca, a small domesticated South American camelid, or even-toed ungulate.

Not just a fluffy face

Whilst the alpaca’s fluffy coat gives it a harmless appearance, it’s proving to be an unlikely hero on sheep farms across the Karoo.

James Brodie, who owns a large farm near the town of Graaff-Reinet in the Eastern Cape province, has been using alpacas as guard animals for the past two years.

The animals became effective after the first six months, he said, and his sheep losses dropped from 450 animals a year to only 150. Some farmers using guardian alpacas have reported a 90% drop in small livestock losses.

Alpacas are very social animals with sophisticated communication systems. They are ferociously territorial and identify closely with their “herd” – even when that herd is made up mostly of sheep. When a predator enters their territory, they become viciously protective and will kick, squeal, spit and vomit at the attacker.

Alpacas are fast enough to run down most predators. At night, the alpacas will collect their herds together and watch over them. One guarding pair can protect 250 ewes. The animals can live for up to 15 years and the purchase cost is about R7 500 (just over $1 000) each.

In 2000, when the first guardian alpacas were imported from Australia, another herd of 60 animals arrived from Chile.

Gavin Lindhorst of African Alpacas was the country’s first alpaca breeder. He did some research into Australia’s alpaca industry which had grown from strength to strength. He believed that given the similar climatic conditions, breeding alpacas for their luxurious fleece would be equally successful in South Africa.

“South Africa is one of the largest fibre-producing countries in the world,” said Lindhorst. “We have a good infrastructure and knowledge of the fibre industry. The alpaca is known to be a high altitude, hardy animal but adapts to temperate climes and survives in most environments.”

Lindhorst found alpacas to be intelligent and easy to manage. There are two main breeds: the huacaya and the suri. Both produce a luxury, valuable fibre (1 kilo is worth R350 or $50) and each animal can produce 1 to 3 kilos every year. Alpaca wool comes in 22 different colours and is non-allergenic.

Alpacas are extremely eco-friendly and have a low carbon footprint. The animals do not require specialised fencing or a large area and their padded feet leave delicate soil undamaged. Their three-compartment stomach means that they can process energy efficiently and consume less grass than other livestock. They can also survive with relatively little water and produce a good natural fertiliser.

There are now over 3 000 alpacas in South Africa, concentrated in the Western and Eastern Cape provinces and the KwaZulu-Natal Midlands. Although the alpaca fibre industry is growing, and a yarn-producing mill has recently started up in Mooi River in KwaZulu-Natal, much development is still needed before it reaches its full potential.

It is important for breeders to purchase high quality animals so that a good gene strain develops. Once the national herd size reaches a critical point, and with the right investment, secondary industries in fibre processing and manufacturing will provide jobs and income in other economic sectors.