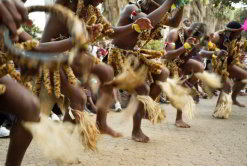 African culture will come under the
spotlight at the expo, as well as trade,
investment and tourism opportunities.
(Image: MediaClubSouthAfrica.com. For
more free photos, visit the image library)

The Africa Institute of South Africa (Aisa) will host an Africa Expo and an international conference as part of its Africa Week programme.

Aisa is a science council whose mission is to conduct socio-economic and political research on the continent. Although it first came into being as an NGO, today it’s a statutory body under the Africa Institute of South Africa Act of 2001, and is supported by the Department of Science and Technology.

The event takes place from 09h00 to 15h00 on 25 May, Africa Day, at the National Cultural History Museum in Pretoria.

Africa Day is held every year to commemorate the foundation in 1963 of the Organisation of African Unity, the forerunner of the African Union. On that day in 1963 leaders of 30 of the 32 independent African states signed a founding charter in Ethiopia’s Addis Ababa.

The theme for 2011 is “Accelerating Youth Empowerment for Sustainable Development’’.

About 400 delegates from the diplomatic, academic and business sectors, as well as 300 students, are expected to attend. The event is also open to the public.

The Africa Expo aims to create awareness of African affairs and culture among the international community, and will highlight trade, investment and tourism opportunities that exist within the continent.

It will also provide an opportunity for delegates to network and establish relationships.

The expo is presented in partnership with Enov8 New Media, and is supported by Statistics South Africa, the National Research Foundation, the Department of Science and Technology, the City of Tshwane, South Africa Tourism and the International Marketing Council of South Africa.

At least 20 African diplomatic missions, including those from Nigeria, Egypt, Eritrea, Angola, Botswana, Tanzania and Mozambique will exhibit at the expo, said Aisa’s CEO Matlotleng Matlou.

“The list of guests and exhibitors will also include government departments, corporate, media, diplomatic missions, schools and universities,” he said.

Renowned teacher and poet Pitika Ntuli will start the day’s proceedings before handing over to South Africa’s Statistician-General Pali Lehotla for the keynote address. There will also be panel discussions in the auditorium.

Africa in the 21st century

The expo will be followed by an international conference, with the theme Africa in the 21st Century and the Quasquicentennial of the Scramble of Africa. The gathering takes place in Centurion, south of Pretoria Central, on 26 and 27 May.

Professor Dani Nabudere, director of the Afrika Study Centre and Marcus Garvey Pan-African Institute in Uganda, and Ntongela Masilela, Professor of English and World Literature at Pitzer College in the US, will deliver the keynote address at the conference.

“Key sessions at the conference include the Scramble for Africa and the Post-Colonial Nation-building Processes; the New Scramble for Africa: China, India, Russia and Brazil; the Political Economy of African Integration; and Governance, Democracy and Development in Africa,” said Matlou.