Sulaiman Philip
A drought in the US, the world’s biggest maize producer, affects food prices across the world. In a globalised agricultural economy, extreme weather conditions that destroy crops on one part of the planet cause food prices to spike in others, as supply drops.

South Africa is a net importer of agricultural products so the price fluctuations on a bag of maize meal are due to weather conditions in the US maize belts.

Paula Osborn, Partner Farmer project manager, joined the programme about eight months after it kicked off in September 2010.

“The project is based on the open share principle. Anyone can become involved. We started with 50 small farmers. After the first few harvests we identify the most productive who we can help develop into commercial farmers. Developing from a subsistence farmer to one able to provide produce for your family and the market is dependent on your own efforts. The programme is designed to give farmers the tools to do that.”

The community benefits from the harvest by buying fresh and healthy produce at lower rates. As the project has grown, farmers have been able to create jobs in a region where unemployment is entrenched.

Theresa Mabhida, one of the 467 farmers in the Umbumbulu project, farms in Etsheni near Port Shepstone. “This project is doing away with unemployment and our healthy projects are curbing sickness,” she says. “My sense of self-worth is high. I wake up every day knowing I have something to do for myself and my community.”

The farmers in the programme are trained to use organic methods to produce crops for local consumption. Soils managed with organic methods have better water-holding capacity and infiltration rates. They also produce higher yields during both droughts and an excess of rain.

“The mentors we have at each project were trained at the Durban Botanic Gardens Permaculture Centre. They are trained in holistic, ecologically balanced permaculture farming methods.”

The harvest includes vegetables such as spinach, beetroot, red onions, potatoes and avocado. In a good month Osborn estimates the farmers in Umbumbulu can harvest up to 10 tons of fresh produce based on the sales of seedlings and seeds supplied to farmers. Most of the harvest is sold to neighbours or used by the family, but one to two tons of that produce is sold to local restaurants and health food shops in KZN. What is not sold is packaged into “veggie boxes” that are sold to local schools, which sell them to students’ parents.

‘This is real food’ 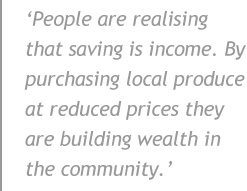 The farmers earn incomes through sales in their local communities and by selling excess to Partner Farmers, who pay close to retail prices. Schools earn an income as well. For Osborn there are two benefits to the system. “People are realising that saving is income. By purchasing local produce at reduced prices they are building wealth in the community. Second, parents tell us that kids who never eat vegetables are now chewing on fresh spinach leaves. Their bodies are telling them that these fresh organic vegetables are real food.”

The programme’s success would be boosted if the yields could be accurately predicted. Ten tons of food is produced from 5 000 to 10 000 seedlings, but what is specifically available at harvest time is difficult to gauge. Mentors’ visits to the fields give an idea of the haul, but recording is manual, time-consuming and error-prone. The programme managers are developing a smartphone app to instantly record what has been planted and what is likely to be available at harvest.

“If each farmer had a cell phone, and that is our hope, we could generate predictive reports that would allow us to sell the harvest before it left the field,” says Osborn.

She believes that the programme in Umbumbulu will run at least until 2016 before the organisation feels comfortable handing the management, production, warehousing and distribution over to a farmers’ cooperative, while still providing mentorship where needed. Future programmes will run on average for just five years before handover.

“Umbumbulu was the pilot; with the know-how and experience gained we can avoid mistakes made in the new projects we run.” 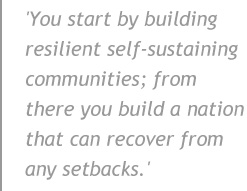 The top-down funding system favoured by government and corporations does not work in agriculture, says Osborn. Agricultural projects need long-term funding, which does not fit in with government or business funding cycles. The Umbumbulu project, for example, will need funding for at least six years before Partner Farmers can hand the project over to the local community.

“In Umbumbulu we would get municipal funding for six months because that fitted into their funding cycle, then no funding for three before funds were released again.”

“Over the period of the project in Umbumbulu, and in our newer projects, we have demonstrated how the model works.”

Including Umbumbulu (South Basin) there are three new projects to help small-scale KZN farmers; the Sterkspruit AgriHUB in Hammersdale-Shongweni in the outer west, and the Hambanathi-Greylands AgriHUB in in the north.

As Osborn points out, “You start by building resilient self-sustaining communities. From there, you build a nation that can recover effectively from any setbacks.”