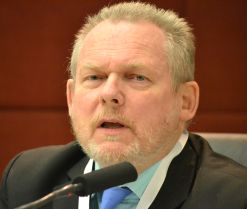 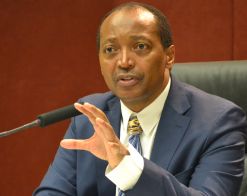 To drive intra-African trade, the continent would have to develop the infrastructure of its corridors and add value to its mineral and agricultural products, said Trade and Industry Minister Rob Davies ahead of the first Brics Business Council meeting.

He was speaking to the media on Monday, 19 August. The council meeting took place on 20 and 21 August at the Sandton Convention Centre in Johannesburg. Delegates, including business council chairpersons from all five member states and several business leaders from the African continent, gathered to discuss, among other topics, value-added trade, business growth and development, manufacturing, and investment ties between Brics nations. The council itself was established during the Fifth Brics Summit, which took place in eThekweni in March.

Davies and the chairperson of South Africa’s Brics Business Council, Patrice Motsepe, gave the press with some insight into one of these agendas, namely, South Africa’s role as a key partner in African trade and integration. The minister said South Africa’s Brics membership was beneficial to the African continent particularly when it came to trade and investment. “We are looking at how we can strengthen investor relations in the productive economy as Africa. We see our future as inextricably linked with the rest of the continent.”

He noted two important factors that would drive intra-African trade, namely the development of infrastructure in the corridors and added value to the continent’s minerals and agricultural products. “Important regional integration processes are under way and we need to consolidate all of this with a massive infrastructure investment programme across the continent.”

While South Africa’s position within Brics was not as a mandated representative of Africa, Davies said the country had “gone out of our way” to engage with the continent. That African business leaders had been invited to the business council meeting was an example of how South Africa was using its Brics membership to interact with the rest of Africa. “When we talk about industrialisation in South Africa, we are talking about industrialisation throughout the continent.”

Brics represents 43% of the world’s population. However, South Africa, with an estimated 52-million people, is an insignificant contributor. China and India have 1.3-billion and 1.2-billion people, respectively, while 194-million people live in Brazil and 143-million in Russia. But once the African continent was looked at as an integrated whole, Davies said, “we start to hit the numbers that can support internal type of industrial processes”. Africa is home to just over a billion people.

Three regional organisations in Africa are already negotiating an integrated trade system called the Tripartite Free Trade Area (TFTA). It will ease cross-border trade and population movement between countries from the Southern African Development Community, Common Market for Eastern and Southern Africa, and East Africa Community. These regions account for 600 million of the continent’s people.

Davies, whose Department of Trade and Industry (dti) is leading TFTA negotiations, said the agreement would create the basis for industrialisation on the continent. “It is not just about having a free trade area. We need to co-operate to promote regional industrial development and put in place the infrastructure.”

Motsepe said in the next few years the quality of trade would increase between South Africa and other African countries. Resources allocated to infrastructure on the continent were part of the process of making the economy globally competitive, attracting investment and creating jobs.

African leaders, Davies said, had been encouraging South Africa in the establishment of the Brics Development Bank. It would alleviate the infrastructure funding gap on the continent, particularly with programmes that link all its economies. The bank would also finance sustainable development programmes in Brics countries and other developing nations, he added.

Brics nations are “places of growth”

While the world tried to deal with the economic downturn, Davies said Brics nations continued to be places of growth. The grouping at present accounts for one-fifth of the global gross domestic product (GDP), estimated at $13.7-trillion (R139-trillion). In 2012 alone, the five nations made up approximately 11% of global annual foreign direct investment flows, which amounted to $465-billion (R4.7-trillion). And 53.3% of the Brics population is economically active. However, Davies cautioned that the recession hit the global economy in waves, and the new wave had resulted in slower growth rates in Brics countries. “The levels of growth are not what they were a couple of years ago.”

According to the Brics Joint Statistical Publication, GDP growth rates of three countries decreased between 2011 and 2012. Brazil dropped to 0.9% from 2.7%, China to 7.8% from 9.3%, and Russia to 3.4% from 4.3%. It was with these statistics in mind that Davies called on all Brics nations to strengthen their partnerships and re-establish a new growth trajectory that was mutually beneficial.

Motsepe urged South African industry to manufacture and export goods that were globally competitive. And indeed, the dti is making an effort to ensure local products and services are of a high standard. It has agreed to address the structural evaluation of locally manufactured exports to China. Over the last few years, it has also drawn up and shared with China a list of 10 evaluated products and 10 investment projects that it believes are attractive to the Asian country. The dti is also encouraging South African manufacturers to take advantage of the weak rand by marketing their goods at competitive prices, which will compete directly with cheaper imports.

Speaking about mining issues, Motsepe, the founder and executive chairman of mining house African Rainbow Minerals, said it was imperative that local investors and labour showed their Brics counterparts that they had the capacity to confront problems and challenges while remaining stable. This meant business would have to “form partnerships that do not only pay [workers] a comparative wage but also create a living condition for them and their families that would enable them to live a reasonable life”.