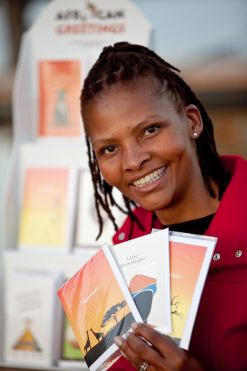 Gildah Tshukutswane always wanted to buy greeting cards in her mother tongue and this inspired her to start a business that sells colourful birthday, wedding, Christmas and thank you cards with messages in South Africa’s indigenous languages.
(Image: Pick n Pay) 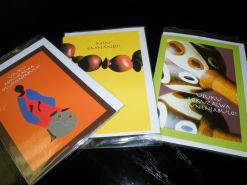 South African entrepreneur Gildah Tshukutswane has turned her dream of creating greeting cards in African languages into a successful business.

Her start-up African Greetings sells a range of colourful birthday, wedding, Christmas and thank you cards with messages in all 11 of South Africa’s official indigenous languages. Each card is illustrated with a photograph or traditional symbol that is specific to the language of the card, such as a Zulu shield, Basotho hat, an African musical instrument and even South African bushveld scenes.

“I always thought it would be exciting to buy a card in my mother tongue,” says Tshukutswane. “I could send my mother a mother’s day card in Tswana and it would put a smile on her face.”

Tshukutswane immediately saw a gap in the market, but without a background in graphic design or the greeting cards industry, she first wanted to make sure that her business idea was a viable one.

Tshuktswane knew she had a good idea, and that greeting cards still have a place in modern society where communication using mobile phones, email, Twitter and Facebook is becoming the norm.

“As brilliant as technology is, we still need that human touch. We need to connect in person,” she says.

Cutting, pasting and coming up with ideas

Tshuktswane, who works as an IT and management consultant, bought a craft book on how to make greeting cards. She spent hours over weekends and in the evenings cutting, pasting, folding and experimenting with different types of cardboard, images, fonts, colours and designs.

She spoke to people fluent in different languages about the types of messages and images that would interest them.

As a sample exercise, she designed and printed 4 000 cards in English, Sotho, Zulu and Xhosa to present to retailers – but getting them interested in her business idea wasn’t easy.

“Almost all of them turned us down. They told me there are too many cards in the store,” she says.

Although she was disappointed, she didn’t give up.

“I felt there was a need for the product and I didn’t want to let go of the idea.”

She attended a small business seminar hosted by supermarket giant Pick n Pay to find out how small suppliers can access the retail market. Here she had an opportunity to tell Suzanne Ackerman-Berman, the retailer’s ethics and transformation director, about her idea.

“Pick n Pay was prepared to try it out and placed a selection of cards in two key stores,” she says. Today the cards are sold in 21 stores across Gauteng, and the business has expanded to include online sales, too.

“We are very grateful to Pick n Pay for the opportunity. We didn’t want hand-outs, we just wanted an opportunity to sell what we have,” she says.

With the cards Tshuktswane wants to promote South Africa’s diversity of languages.

“We need to celebrate and preserve our indigenous languages,” she says. “With the cards we are making people conscious of other cultures.”

Printing so many cards in multiple languages and themes is a logistical feat, and she works closely with designers and translators to ensure that each card is linguistically and culturally accurate.

Distribution is also tricky as sales depend entirely on the geographical location of the store. Zulu cards, for example, sell better in Johannesburg than in Pretoria.

This year she wants to print the English translation of the message on the back of each card.

“This way the cards also serve an educational purpose to teach people about other languages,” says Tshuktswane.

She has big dreams for her business; they involve expanding into other markets on the continent and building a stronger online presence.

Through crowd sourcing techniques she wants to create a network of graphic designers who are willing to submit their card designs. Then, people can vote for their favourite designs and the winning entries will be printed. Designers will be paid a percentage of both online and printed card sales.

“I also want to expand the business because then I can create employment,” she explains. “The dream is quite big.”

Tshuktswane feels that the development of entrepreneurs is important for South Africa’s economic growth, but small business owners need access to markets. “Retailers should be willing to give opportunities to small businesses, as this is the only way to grow the economy.”