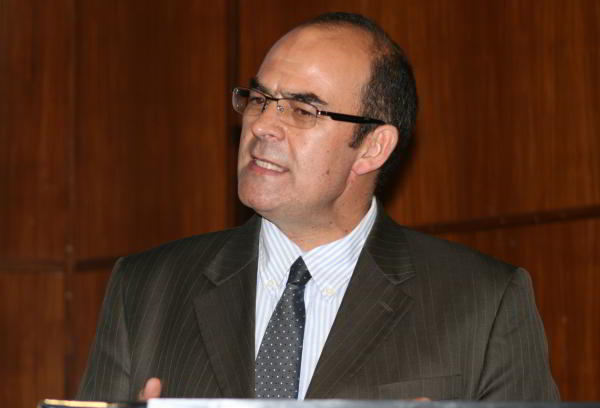 Andre Groenewald from the Department of International Relations said if Africa takes advantage of its vast natural resources, the continent can reach $13-trillion by 2050. (Image: Ndaba Dlamini)

Africa, it seems, is on the rise. The size of the economies of most countries on the continent is growing and economists are predicting that by 2050, Africa’s economy will reach $13-trillion.

African countries have to take advantage of these positive developments and communicate the enormous potential that lies within the continent to the world, said Andre Groenewald, director of diplomatic training at the Department of International Relations and Cooperation.

Groenewald was speaking at a seminar organised by Brand South Africa and the Department of Trade and Industry at the Council for Scientific and Industrial Research on Thursday, 27 March. The seminar, attended by African diplomats based in South Africa, focused on, among other issues, Africa’s competitiveness and how strong nation brands contribute to improving the continent’s image.

Groenewald said considering the size of the continent “there is room for growth and room for markets in Africa”.

He said, “We are the only continent remaining with resources. There was a study done in the UK at the London University where they found out that for an economy to grow to an average of $13 000 income per year per person, that country will use exponential amounts of steel.”

Many countries, including India and China, are far off this benchmark. Steel, said Groenewald, “will remain a big issue and there is lots of iron ore resources on the continent”. In this regard, opportunities abound, he said.

In addition, a recent study by the World Bank predicts that Africa’s GDP will grow by 6% in 2015. In the past five to 10 years, the continent has been recording a growth of 5% per annum. The only region ahead of Africa in terms of growth is China.

“We are the second-fastest growing region in the world. And this says a lot. If you link this to the population and the resources then Africa is indeed rising,” Groenewald said.

In 2013, the World Bank also established that among the 15 economies with the biggest improvements in their economies since 2005, five – one third – are in sub-Saharan Africa.

“This is a significant finding for the sub-region indicating improving conditions for doing business in a period when negotiations regarding the establishment of a trilateral free trade area encompassing the Southern African Development Community, the Common Market for Eastern and Southern Africa, and the East African Community are taking place.”

This free trade area, according to Groenewald, will create an integrated market of more than
650 million people, and double that number in the US and the European Union.

Groenewald said Africa’s poverty rate has also dropped from roughly 44% to 22% in recent years. “While we are not doing well on the MDGs [Millennium Development Goals], we have halved the poverty and this shows that Africa is making progress.”

There is “incredible economic activity going on in Africa”, according to Groenewald. In Kenya, for example, a software banking application recently developed has become so popular that there are more banking transactions per year done through the software than that government’s budget.

One of the most notable things about Africa is cellphone usage. Groenewald said 71% of adults in Nigeria own cellphones, 62% in Botswana and more than half the population of Ghana and Kenya; a great opportunity for investment in the sector.

“All these are opportunities that Africa needs to brand as a continent. We need to tell the outside world about this,” said Groenewald, adding that South Africa is one good example where there are many good news stories to tell.

There are two big growth opportunities that Africa has missed, something that shouldn’t happen again. The first is agriculture, where Africa has the best competitive advantage in the world, according to Groenewald. “Kenya is a good example. They have over the past 10 years become the biggest exporters of flowers. If we can farm flowers then we can farm about anything.”

Also, Africa should take advantage of its huge natural energy reserves and market itself competitively to the whole world, said Groenewald.