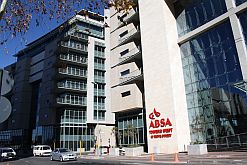 Absa Towers West, located in the
Johannesburg CBD, is eco-friendly. 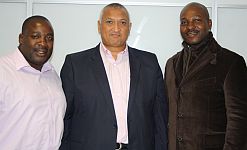 The Absa Campus, located in downtown Johannesburg and home to the bank’s headquarters, consumes at least 12MW of electricity per day – but hardly any of this is drawn from the national grid, which is good news for South Africa’s power utility Eskom.

Absa has built has an eco-friendly energy centre to generate its own electricity from low-pressure gas in Towers West, one of eight high-rise blocks of offices on the campus.

Power generated from the centre is mostly used between 6.00am and 10.00pm, during which electricity consumption peaks in local businesses. The co-generation scheme used at the centre means that Eskom’s power mainly comes into play at night after 10pm, when the demand for energy is less. This keeps the electricity bill in check.

“The energy centre has the capability to power the entire Absa Campus. The campus becomes independent off Eskom’s grid as demand peaks,” Shaheed Hendricks, head of Absa’s corporate real estate services, said in an interview.

The energy centre has four gas-powered engines generating a combined 11.2MW of power. Each of the four GE Jenbacher J620 gas generators is enabled to peak at 2.8MW. Diesel units are on standby to generate a further 6MW during an emergency.

The gas used in the engines is generated from Egoli Gas, the council-owned natural gas supplier. Absa’s demand magnitude meant it had to install its own pipeline that stretches from Egoli’s location site in Auckland Park, some 6km from the Absa Campus.

Egoli Gas has 1 200km of gas pipelines that reach various users around Johannesburg.

“There’s a dedicated pipe from Egoli Gas to the Absa Campus. That makes us the biggest user of their services,” said Sandile Mthiyane, Absa’s head of energy. “Because of our energy requirements, we had to have our own dedicated pipe.”

Absa’s decision to introduce the gas-generation system at its headquarters was largely driven by power outages experienced in South Africa between 2007 and 2008. The new headquarters were being built during this period.

“All the power outages were a major motivator. We were forced to think differently,” said Mthiyane.

Absa’s decision was also in response to Eskom’s appeal for responsible electricity usage. The utility continues to urge South Africans to do this, with a special focus on high-energy consumers.

The centre does not emit any smoke or exhaust gas fumes. “Besides reducing our energy consumption, it contributes to the wellbeing of society,” Hendricks said.

The carbon footprint of Absa Campus has also been reduced quite significantly, which is enabling the bank to trade carbon credits.

Absa, one of the four major banks in South Africa, is hoping to expand the centre in future by adding two more engines that could generate an extra 6MW.

Once this happens, the centre could be able to supply power to neighbouring facilities like the Carlton Centre, which houses Transnet offices and a shopping mall. Residential blocks of flats in the vicinity could also score, and in turn reduce pressure on Eskom’s national grid.

“In future we can export power onto the grid,” said Hendricks.

Besides being home to the energy centre, the Towers West is the greenest building on the campus, and certainly beats all those in the Johannesburg CBD.

A number of energy-efficient designs put it above the rest.

The 3 000-plus employees working from the campus rely on a heat-recovery steam generator to exploit wasted energy from the gas turbines. It’s harvested and then used for air-conditioning as well as warming up water for showers.

“Instead of using electric heaters, we’re capturing exhaust heat from the machines to heat up the air that we use to either cool or warm the building,” Mthiyane said. “We use exhaust heat that would otherwise be wasted.”

The roof over the building’s wide atrium is transparent enough for natural light to pierce through, ensuring that there’s no need to use light bulbs.

“The lights automatically switch off if there’s no-one in a room. They sense the movement of people in the building.

“As soon as you walk into the room, the lights will switch on,” Hendricks said.

Now the challenge for Absa is to transfer similar technology to other buildings on the campus, as well as introduce such interventions at many of its branches spread across the country.