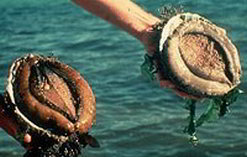 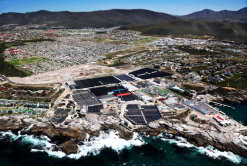 Over the past decades, the poaching of abalone has reached such proportions that it has become a full-scale industry.

Fortunately, with innovative companies like Hermanus-based Abagold leading the way in developing a sustainable local abalone aquaculture, there is hope for the future of the South African abalone industry and the protection of stocks of the threatened natural resource.

According to independent natural resources advisory company Feike, a record 3 000 tons of abalone was poached from South African waters in 2008 compared with the annual allowed quotas of 1 000 tons of farmed abalone and 125 tons of harvested wild shellfish.

Popularly known as perlemoen (Haliotis midae) in South Africa, abalone (Haliotis sp.) is a mollusc that’s sought not only for its soft flesh, which may be eaten raw or cooked, but also for its mother-of-pearl-lined shell, popular in decorative items.

Most abalone in the southern hemisphere is found in the cold waters off the South African, Australian and New Zealand coasts. The animal is protected in South African waters, and harvesting of wild individuals has been banned since 2008, while commercial operations need a permit to export.

A brochure (PDF, 123KB) on recreational fishing may be downloaded from the Fisheries division of the Department of Agriculture, Forestry and Fisheries.

Abalone meat is generally not for sale in South Africa, although selected restaurants around the country do serve it – at a price.

Despite these regulations, stocks of abalone are dwindling because of illegal commercial harvesting. Most of the illegal harvest – as well as the permitted catch – ends up in Asian markets.

Fortunately, in the 1980s and early 1990s, before the allure of easy money from abalone poaching had taken hold, there were visionaries who realised that measures to protect the resource were insufficient and the only possible solution was aquaculture.

In 1984 Dr Pierre Hugo, a veterinarian in Hermanus on South Africa’s southern coast, conducted research into breeding abalone in captivity, which led to the establishment of a pilot hatchery in the town’s old harbour in 1991.

Hugo’s efforts resulted in the formation of Hermanus Abalone (Pty) Ltd in 1995, the establishment of the Sea View abalone farm in the new harbour in 1998 and the export of the first 100kg of produce in 1999.

In 2002 the company’s name was officially changed to Abagold. It has since grown into an international competitor in the abalone aquaculture industry, producing and processing more than 220 tons of abalone a year from its three farms – Sea View, Bergsig (Afrikaans, meaning “mountain view”) and Amaza Waves.

Abagold’s growth and success through the years recently came to the attention of investment management firm Inspired Evolution. Through its R700-million (US$100.3-million) Evolution One equity fund, the company injected R52.5-million ($7.5-million) into Abagold, enabling it to increase its export capacity and sustainability with cleaner farming technology.

The money will be used to develop a fourth farm, Sulamanzi, on 7ha of land purchased in 2010. Construction has begun and the first tanks will be operational by the fourth quarter of 2011. Once completed, the new farm will increase Abagold’s total production capacity to 475 tons per year and increase the current staff compliment from 270 to 470.

According to Inspired Evolution, the grant will also contribute to the establishment of an employee trust, which will help to empower the local community.

The company’s state-of-the-art processing facility was commissioned in 2006 and has helped Abagold set a benchmark in South Africa for canned and dried balone.

The plant recently achieved the international Hazard Analysis and Critical Control Point (HACCP) food quality and safety certification for the production, processing and packaging of farmed abalone. The certificate was issued by the SGS certification company and is valid for three years.

Abagold became the first abalone farm in South Africa to participate in an adult education programme for its staff. To date the company has put 170 employees through the Adult Basic Education and Training course since 2005.

Also, as part of the HACCP certification, all factory employees underwent training in HACCP principles and food safety, and received their certificates at a formal function.

Abalone production comprises four phases. Fertilised eggs are hatched and nursed for one week in sterile, filtered water before the larvae are transferred to the settlement tanks, where they spend the first few months feeding on diatoms. Abagold’s hatchery produces about 2-million larvae every two weeks.

At about three months, the animals are then transferred to weaning tanks and weaned onto a special artificial feed. Here they stay until they grow to juvenile or spat size. The hatchery produces excess spat, which ensures that only prime animals are selected for the final stage in the process, ensuring a superior product.

The abalone are put into grow-out tanks at eight months of age, where they remain for 48 more months and reach a weight of about 200g each. At this stage they are ready for harvesting.

Abagold offers 45-minute tours to the public at its Sea View farm. Visitors are able to learn about aquaculture and get a closer look at the abalone.