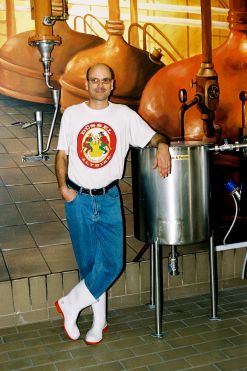 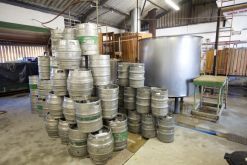 Microbrews produce in a month what industrial brewers can in a day.

Dedicated hobbyists and beer-loving entrepreneurs have spurred a growth in the craft beer industry in South Africa that is offering up a varied array of fresh, bold tastes.

Moritz Kallmeyer, master brewer and distiller at Drayman’s Brewery and Distillery in Pretoria, is one of the people at the forefront of the South African craft brewing industry. South African palates are evolving and over the past few years brewers in the country have produced craft beers that can hold their own with the best that America and Europe have to offer, he argues. “We don’t have the same drinking habits as Europeans, who can have a glass of beer with lunch. Beer drinkers want to have three or four beers at a go. Fruity and flavourful beers are popular, but they can’t be too satiating.”

Invention and originality are the key – taking a base recipe and experimenting until you discover something that appeals to your personal taste – such as the double chocolate stout from Bridge Street Brewery in Port Elizabeth. It is the creation of brew master Lex Mitchell, the godfather of South African microbrewing.

Mitchell’s lifelong interest in beer began in high school and his education continued once he started working for South African Breweries (SAB). At the brewery giant he had access to brewing magazines that charted the growth of the microbrewing industry in England in the 1970s. In 1983, his home brewing experiments became a business when he opened Mitchell’s Brewery in Knysna in Eastern Cape, the first microbrewery in South Africa. At one point, Mitchell’s was the largest brewer in the country, after SAB, which controlled more than 99% of the market.

“South Africa does not have a history like England’s, where you have beers like Old Peculier that have been brewed for hundreds of years, but I believed that there were guys like me who wanted to have variety.”

According to Dylan Roach, one time marketing and sales director of Mitchell’s Brewery Gauteng, the microbrewery industry is doubling year on year but it is still just 1% of the South African beer market. It has grown in tandem with the slow food movement. The slow food movement, which took hold in South Africa in the late 1990s, is about preserving and appreciating local food culture and protecting biodiversity. As more and more people seek out local alternatives to mass produced food, they are also embracing the handmade nature of microbrewing. Like slow food advocates, microbrewers believe in traditional products made using regional produce and small scale artisanal production.

Today’s microbrewing industry has grown out of the home brewing subculture, a hobby that has been popular among South African men for decades. Kallmeyer says that every brew master he has spoken to has a story of a dad or an uncle whose garage was taken over by buckets and bubbles. “A lot of that beer ended up being an undrinkable green muck. The shift towards craft beer really began when home brewers exchanged syrup base for dry hops and barley.”

For the majority of South Africans, sorghum beer is the mother of craft brewing. First brewed in the Nile Delta, the recipe followed the migration root of tribes moving south in search of cattle grazing and space. Sorghum brew isn’t for everyone: it’s a sour, milky beer that keeps fermenting in the container. Commonly sold in cartons with dried rivulets of beer on the packaging, this “worm” is a sign that the beer is ready to drink. Lucy Corne, co-author of the guidebook African Brew, found sorghum to be sour, slightly off tasting, but refreshing. “Two sips quenched my cultural curiosity and my desire to be polite.”

The industry has grown from a smattering of local breweries in 2009 to close on 60 craft breweries spread across the country. SABMiller, previously SAB and now the biggest brewer in South Africa and the second largest in the world, has slowly begun embracing the country’s craft beer industry. It sponsors beer festivals, an annual university brewing challenge, and now a contest to crown the country’s best microbrew. 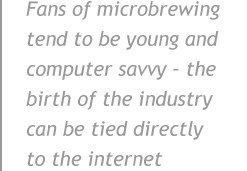 Kallmeyer says he is uncomfortable with the influence that SABMiller is beginning to exert in the industry. “If all South African beer drinkers were still content drinking clear, bland, fizzy beer the craft beer industry would not exist nor be growing at such a fast rate. Don’t get me wrong, commercial breweries make impeccable quality beer, but craft beer drinkers are looking for a lot more flavour and character in their beers, even to the point of being rustic. Craft brewers are also attracting female beer drinkers, something SABMiller has not been really successful at doing. We have created a new industry and now there is a feeling that they want to step in and capitalize on it.”

Others disagree with his view. Jonathan Nel at Three Skulls Brew Works in Johannesburg, a former brand manager at SAB, it can only help the industry: “Economies of scale aside, if SAB feels the need to be present at craft beer festivals then the same festivals can only benefit from the cheque book and marketing provided by SAB. When all is said and done, the craft beer drinkers will decide who gets their hard-earned cash and respect, and my money’s obviously on the little guy.”

Fans of microbrewing tend to be young and computer savvy. The birth and growth of the industry can be tied directly to the growth of the internet. When Kallmeyer first opened Drayman’s in 1997 he struggled to make a living. But the web has made the world smaller and made it easier for like-minded people to find each other. “Guys were asking themselves why they could not have the same beer experience as someone in Seattle. They found one another online and started sharing information about regional brewers.”

For the growing number of beer entrepreneurs, being able to cater to different tastes allows them a certain amount of creativity. “Beer drinkers want more flavour, different flavours, different beer styles and even different bottle sizes or glasses,” explains Nel. “One of the major positives about being a small microbrewery is that you can be agile. If a product doesn’t work you can change it. That is not to say we are an industry built on excess, but rather one that will break the rules, not for the sake of being a rebel, but because we can and we will.” 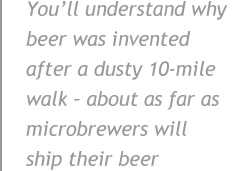 Microbrewing is also a driver of employment. Its hands on production approach means it is a labour intensive process that can use as much as 100 times more labour as a commercial brewer. For some brewers this is reason enough for the government to relook at the legislation covering their business. “In Europe there is a clear distinction between guys like us and commercial brewers. There is recognition that the industry is a driver of development that needs to be nurtured,” Kallmeyer points out.

Beer was first brewed in Babylon more than 8 000 years ago and the process is based on strong scientific principles. They are principles that are tested and judged annually in the SAB Intervarsity Beer Brewing Challenge. First held in 2006, its purpose is to encourage appreciation of craft beer and beer culture among students. The 10 South African universities with breweries on campus compete against each other to produce a variety of different craft beers. This year’s winner, the University of Pretoria, has also been the most successful team; it has won on three other occasions – 2008, 2010 and 2011.

English theologian GK Chesterton once said that a man would discover why beer was invented after a 10-mile walk along a dusty road. Most microbrewers would consider 10 miles about as far as they would want to ship their beer; they want them served close to home at peak condition. Regional originality is a part of the charm of craft beer and gives beer lovers a reason for a road trip, order up something new and take a long slow sip.