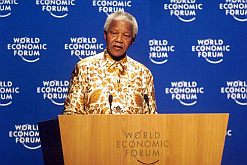 Team South Africa is fielding a strong presence, in the form of a private-public partnership headed by Brand South Africa, at the World Economic Forum’s (WEF) 40th annual meeting.

This high-powered gathering of the world’s financial and political leaders takes place in Davos, Switzerland from 27-31 January with the theme Improve the State of the World: Rethink, Redesign, Rebuild.

The South African delegation, comprising business and government representatives, aims to position the country as an attractive investment and strong emerging economy in this, Africa’s most important year.

The 2010 Fifa World Cup has drawn global attention to the southern tip of the continent, and the team is taking advantage of this massive event to petition for more investment from WEF delegates, as they promote the diverse opportunities available in South Africa under the theme Experience South Africa.

“With the rise of China, India, and Brazil among others as economic powerhouses, the global order is fast becoming more democratic,” said Brand South Africa chair Anitha Soni. “South Africa may not rank with these countries in GDP terms, but based on its track record, experience, and position within Africa, its voice is an important and influential one.”

Brand South Africa, the Presidency, Department of Trade and Industry, the Government Communication and Information Service, and Business Leadership South Africa are behind the organisation of the trip to Davos.

The delegation is headed by South African President Jacob Zuma, who will participate in a number of sessions and is expected to hold several bilateral meetings.

There are also a number of participants from civil society – they are the archbishop of the Anglican Church of Southern Africa, Thabo Makgoba; Civicus secretary-general Ingrid Srinath; vice-chancellor of Cape Town University Max Price; and co-founder and president of NGO mothers2mothers, Gene Falk.

These are just a few of the many influential leaders that make up South Africa’s biggest delegation yet to Davos.

The country is a strong regional leader and has injected almost US$1.8-billion (R14-billion) into infrastructure and transport upgrades, not only because of the upcoming world football spectacular, but also with a view to the future economic growth of the country and the Southern African region.

South Africa has also invested extensively in other African economies, with many private and state-owned enterprises expanding their operations beyond the country’s borders.

On a wider level, South Africa participates in a number of global institutions such as the World Bank, the UN network and the International Monetary Fund. As a member of the G20, or Group of Twenty, South Africa is poised to make its mark on global trade and finance, as the balance of economic power shifts towards strong emerging nations such as China and India.

South Africa’s financial systems have garnered world praise, and its industrial and manufacturing sectors are world-standard. Recognition as a major global financial force came from the World Economic Forum, which in its 2008/2009 Global Competitiveness Report listed South Africa’s banks as the 15th most secure of 134 countries surveyed. In this, South Africa fared considerably better than the US, the UK, Switzerland and Germany.

The same report ranked South African auditing and reporting systems fourth on the list, again better than the UK and US.

Academically and intellectually, South Africa has many resources to draw on, with world-renowned universities and research institutions situated across the country.

The creative industries are a fast-growing and significant part of the country’s economy, and achievements such as the acclaimed film District 9 have earned widespread respect. Davos delegates will experience the best of South African music, arts and cuisine at the Grand Soiree in the Swiss town on 30 January.

Here performers such as Freshlyground, the Afrotenors, Sibongele Mngoma, KB, Concord Nkabinde and Shannon Mowday, and a host of award-winning South African chefs will provide a tempting taste of the country’s creative offerings.

An exhibition of works from nine major South African contemporary visual artists – among them Norman Catherine, Vusi Khumalo, Willie Bester and Zwelethu Mthethwa – will provide a feast for the eyes for the duration of the conference.