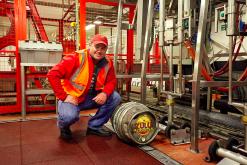 Richard Chennells with a barrel of Zulu
Blonde, brewed in the UK for the
Wetherspoon Real Ale Festival. 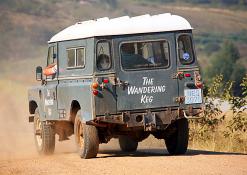 The Wandering Keg on its way to bring
joy to more thirsty South Africans. 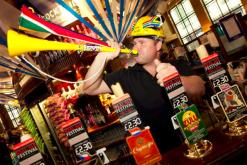 Chennells and Zulu Blonde, second
from right, saw off competition from
49 other beers to claim top spot in 2010.
(Images: Zulu Blonde)

A local beer produced by an independent microbrewery was introduced to the UK in March and has taken that country by storm.

Zululand Brewery, founded in 1997 by the Chennells family, is the smallest family-owned brewery in KwaZulu-Natal. Their first brews were produced in a little pool shed in the market town of Eshowe.

Zulu Blonde, their flagship brew, was introduced to the international market in 2010, and the demand for this brew has not slowed down since.

It started when owner Richard Chennells, his father Graham Chennells and uncle Mark Chennells decided to start brewing a local beer to tempt visitors to their Eshowe establishment, the George Hotel.

Lurking in the hotel’s storage shed, the trio used home breweing kits to make small amounts of 150 litres of lagers, porters, pilsners and blondes (pale ales), all destined for the hotel’s bar, the Happy George.

“The blonde beer became known as Zulu Blonde, and this is where the brand was born,” Richard Chennells explains.

Chennells originally hails from the tourism and finance sectors, but he’s a born and bred Zululander and his heart was with the brewing machines and the culture of the province. His father Graham studied Zulu culture and as well as being a brewmaster, has been a farmer, a paratrooper, won the gruelling Dusi Canoe Marathon, is a retired rugby player and is a former mayor of Eshowe.

Although Zulu Blonde was created out of trial and error, the recipe was perfected in 2005 after the younger Chennells came back from a brewmaster’s course through the American Brewers Guild.

To promote the beverage further afield, the Wandering Keg, a Land Rover loaded with beer barrels and fitted with a tap between the back lights, took to the roads in Johannesburg.

Beer and golf weekends were then introduced in Eshowe and became popular with the thirsty visitors, so much so that the George Hotel and Zululand brewery then put together special Beer and Golf weekend packages.

The proof of the pudding is in the – drinking?

However, it was during the 2010 Wetherspoon International Real Ale Festival, a festival hosted by successful British pub chain JD Wetherspoon, which boasts almost 850 branches across the UK, that Zulu Blonde became a hit.

Brewed at Marstons Brewery in Burton-upon-Trent by Richard Chennells, Zulu Blonde – the only South African representative among 46 local and six international brews – was sold out during the first week of the three-week festival.

Chennells’ tasty product eventually claimed the title of best beer, and he was invited back to brew a further 120 000 pints at Everards brewery in Leicester to supply the chain’s 833 pubs with the best-selling Zulu Blonde during the 2010 Fifa World Cup.

The Wetherspoon result says a lot for the quality of the South African beer, because the beer market in the UK is intensively competitive and beer-drinking has been a part of the culture for hundreds of years.

Two years later Chennells returned to the Real Ale Festival for the 2012 edition, where he brewed 100 000 pints at the venerable Caledonian Brewery in Edinburgh.

Since then, he’s struck a deal with JD Wetherspoon to have the popular Blonde brewed in the UK to sell on tap at all pubs in the chain.

Putting Eshowe on the brewing map

Currently, Zulu Blonde is only brewed overseas and has sold over 330 000 pints thus far.

And while the frothy golden nectar is not available locally except at the George from time to time, local beer lovers will be happy to know that there are plans to buy a bigger brewery and supply beer to the eager South African market.

“The success of the brand to date was not on the cards and we never saw it coming,” says Chennells.

And as successful as Zulu Blonde may be, the Chennells’ roots are still firmly in Eshowe, where the company is involved in several community projects, including skills development.

The Chennells family has helped build over 3 000 classrooms in rural Zululand, and over a million children have been educated in those classrooms. In 2006, Richard Chennells and 15 others helped raised about R1-million (UD$128 000) for Rotary International, where his father Graham served as president some years ago.

Eshowe is the oldest town in KwaZulu-Natal, and has a rich history. Although it is a popular tourist destination because of its Anglo-Zulu war connection and indigenous Dhlinza forest, Eshowe is now a small agricultural and trading district that’s made its mark through the success of this local brew.

Once the company has grown enough locally to hire local people, explains Richard Chennells, he looks forward to carrying on his family legacy of rural upliftment in Zululand.