Zuma and Annan were addressed a side-event for early action on climate-smart agriculture, an initiative driven by the African Union and the New Partnership for Africa’s Development (Nepad).

Climate-smart agriculture is being touted for all of Africa to deal with climate change impacts that have been taking a toll on food production and security.

“Climate-smart agriculture seeks to enhance agricultural productivity by improving on resilience,” Zuma said, adding: “Farmers should be at the centre of this transformation of the agriculture sector.”

Research shows that agriculture has a huge potential to cost-effectively reduce greenhouse gases through changes in agricultural technologies and management practices, particularly in developed countries.

With nine-billion people expected to inhabit the world by 2050, food production in Africa alone must be tripled, according to experts.

Annan, who is chairman of the Alliance for a Green Revolution in Africa, said Africa had to grow food to meet its own needs and also be able to export any surplus. He said this would require a collaborative effort from farmers, businesses, government and scientists.

“We need the creativity, leadership, resources, expertise and solidarity of every organisation and individual if we are to find solutions to this common challenge,” Annan said.

“We all have a part to play as well in ensuring our leaders do not shy away from the hard decisions necessary to ensure the world we pass on to future generations is a stable, secure and healthy one.”

“Organic agriculture has a smaller footprint on the natural resource base and the health of agricultural workers than conventional agriculture … food security, poverty and climate change are closely linked and should not be considered separately,” Zuma said.

“As climate change increases its impact on agriculture, we strongly support African leaders in their efforts to boost action that will help feed Africa and the world,” said World Bank MD Sri Mulyani Indrawati.

“This is about working together … we need strong, continuous and collective action to boost agricultural production and productivity and to improve distribution networks, so people have food security,” Indrawati said.

Zuma and Annan both said there had to be a link between climate change, food security and poverty.

“We need to engage on emerging issues including finance and technological support and approaches such as climate-smart agriculture that are geared towards addressing food security, adaptation and mitigation,” Zuma said.

He added that investments in agriculture development and incentives provided to local farmers had to be complemented by macro-economic policies to ensure sustainability. 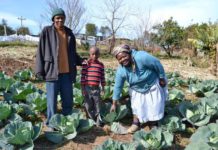